It's not too often I give out reviews for the disastrous albums out there. Being open minded, I tend to like a lot of the stuff out there and even tolerate some (except for rap and disco, which I think are dredge of the earth) Every now and then I come across a shitty album in my collection that I wished I never heard. Here are a few...(in random order) 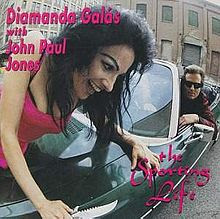 Diamanda Galas with John Paul Jones The Sporting Life-1994 Being a die hard Zeppelin fan, I find it hard not to pass up anything Zep related, this one however, is one of that I should have. Galas pitifully hisses, whines, chants, howls and screams like Yoko Ono in heat. Can not comprehend a word to what she is allegedly singing. What amazes me the most here is that John Paul Jones, whom has a good ear for talent, is even working with her.

Impellitteri Stand in Line-1988 On the back cover of the album was inscribed with the words of guitarist Chris Impellitteri, "I promise that my guitar solos will only get faster". Ok, I'll bite. Like a fish caught on a hook reeled into a frying pan-not good. Impellitteri's guitar playing is as fast as a Porsche stuck in the mud. Tires spinning, but going nowhere. Like Yngwie Malsteam, he's all technique with no soul nor emotion. Even with ex-Rainbow singer Graham Bonnet on hand for the vocals couldn't save this album.

Kingdom Come In Your Face-1989 Or should I say Kingdom Clone? The success of Whitesnake's 1987 self titled release brought out an avalanche of Zeppelin sound alike bands hoping for their 15 minutes of fame. We had Bonham, Great White and others, each trying to reduplicate the sound of Zeppelin, but just couldn't "get it right". It takes more than amps cranked up to 11 and a Plant sound alike to recreate the Zep sound. This one however, takes the cake. Nothing exciting nor memorable here, just a listless rehash of another Zep clone.

Emerson Lake & Palmer Love Beach-1978 A record that ELP released only because they owed it to their original label. Love Beach isn't simply bad, it's downright stale and pathetic. It's about creative as washing dishes. I bought this at a rummage sale for 50 cents, I'm still waiting for a refund....

Foreigner Agent Provocateur-1984 With each album coming out from Foreigner, they seemed to grow lamer and lamer, trying cash in on the ballads. Yeah, "I Want to Know What Love Is" became a HUGE hit for the band, yet it bored me after awhile. The rockin' moments became fewer and further between. "That Was Yesterday" was the best track of the album, the rest is filler.

Just a few for now. More bashes to come soon as I dig through my collection. So what's your worst album?

Posted by drewzepmeister at 6:55 PM

Those are some really bad albums. I hope you are not keeping them because I know you will not be listening to them.

Love Beach is a waste of plastic and is the most tossed off record I've ever heard. I bought the first Kingdom Come album and traded it in for a old 45. Never heard the Imperletti album but your not the only one that called it a disappointment.

The biggestest POS CDs that I heard was the Melvins' Prick album (only decent track was Pure Digital Silence), Starclub (1 good song, rest garbage) And King Of Kings, some bad prog rock from 1993 thereabouts. But the most recent POS CD that I got the Sin-arta tribute to Frank Sinarta that Bruce Kulick puked out to the world this year and may be the worst all time crap album for me.

Tender Heart, being a completest with certain artists I tend to keep the albums weather I like them or not.

OMG Crabb, the very thought of Kiss' Bruce Kulick doing Frank Sinatra is more than enough reason to stay away that record.

Drew,you are spot on about Impelliteri...a very athletic guitarist,just not a very musical guitarist. My bad albums list includes Tales From Topographic Oceans by Yes , Be Here Now by Oasis(one,count'em one decent track) and Europe's The Final Countdown ( a perfect waste of guitarist John Norum's talents and my time).

Hi john! The controversy that surrounds Yes' Topographic Oceans is the fact there are four 20 minute songs spread over two discs. Critics have panned the album either overindulgent or ambitious. Personally, I feel Yes was trying to be ambitious at this point. I especially liked "The Ritual" off the album.

As for Oasis, the only album I have from them is Definitely Maybe. I was never really a huge of them.

I had forgotten that I had the Final Countdown tell you mentioned it. I liked the title track, but the rest of the album was a blah, blah, blah for me. It's been sitting in my vinyl racks since the '80's collecting dust.

While I would agree that Tales From Topographic Oceans is not their best, it is certainly better than much of the Trevor Rabin years. I too love Ritual and The Revealing Science of God.

For me one the single most worst purchases I have made (although used) was Jethro Tull's Under Wraps. It is JT's try at 80's techno crap. I can only listen to maybe one song form that CD (Under Wraps #2).

Also, much of King Crimson is a waste for me (although I got those from a friend).

Ummagumma by Pink Floyd for the most part sucks as well (and I love Pink Floyd). The version of Astronomy Domine is awesome but that is about it.

For Yes, I think the Union album is far more deserving of derision and ire than Tales From Topographic Oceans. I thought it was an interesting concept but it was horribly executed.

Another interesting concept that was poorly executed was GTR. Steve Hackett & Steve Howe in the same band should have been BRILLIANT. It was mediocre at best. Too many egos in one room.

On a similar note the Paul Rodgers/Jimmy Page collaboration, The Firm, was surprisingly underwhelming. Putting a guitarist like Jimmy Page in a band with Paul Rodgers (a singer I prefer over Robert Plant-- I know that's sacrelige for Zep fans but Rodgers can still belt it like no one's biznitch!) should have come together far better than it did. Instead we got milquetoast.

But I think the most god-awful album I've ever tortured my ears with was Chicago XIII. As much as I love the best of their material I loathe this god-awful cringe inducing beer coaster of an album. The only track worth listening to is Street Player (thanks largely to a guest trumpet solo by Maynard Ferguson) luckily that's the first track. The rest is coked up drivel.

Hey TM! What's up? I'll agree with you that Topographic Oceans is a lot better than most of the Trevor Rabin materiel, however as Perplexo states, Union is far more deserving of derision and ire than TFTO. He's right! To me, Yes got lower than that. Their 1997 release of Open Your Eyes (with Billy Sherwood AND Steve Howe on the guitars was a major bore.

Ummagumma is easily, the worst album from Pink Floyd, however I have reservations for The Final Cut and Atom Heart Mother.

Hey Perplexo! Now the Firm isn't all that bad. My only complaint about either album is the LACK of Jimmy Page. Being a Zep freak, I wish I would have heard some kickin' solos from Page, otherwise Paul Rodgers kicked some major butt vocally...

The Firm wasn't "bad" it just fell well short of my expectations. They never should have covered You've Lost That Lovin' Feelin' though. Easily the most out of place track on their first album.

They put out 2 "good" albums but given the talent of Rodgers & Page I was expecting "great" I guess.

I've got a live soundboard bootleg of Rodgers & Neal Schon in Vancouver back in 1993 that I much prefer over The Firm's 2 albums. For whatever reason that pairing actually worked much better than his pairing with Page. Maybe their personalities were a bit more compatible than his and Page's personalities.