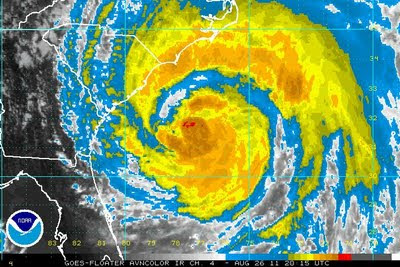 Over the weekend Hurricane Irene sliced up the Atlantic coast from North Carolina to New England leaving a death toll now at 37 and a trail of destruction in its wake. As of this point, millions are still without power and the rebuilding begins.

Once a storm to be feared to a degree catastrophic proportions, Irene roared out of the Bahamas a Category 3 hurricane packing winds of over 110 MPH. Residents of the Atlantic coast had every right to be afraid, especially to those whom live in New York City and other large metropolitan areas. In which, of New York haven't had a major hurricane in God knows how long.

A Katrina like catastrophe, Irene wasn't, reduced to a Category 1 be the time it made landfall on the Outer Banks in North Carolina. By the time made it's third American landfall at Coney Island, New York, Irene was downgraded to a tropical storm. A huge sigh of relief and good news for most everybody. Still, it was a storm to be reckoned with-left a huge mess for everyone to clean up.

Enough with the news...I'm sure everyone heard all the details about Irene. Storms always captivated my interest, especially hurricanes and tornadoes. It's a wonder that Mother Nature, who's beauty and splendor can be so destructive and terrifying....Now, I wonder how Seano from the Circle of Fits is doing. He's from Philadelphia...

Posted by drewzepmeister at 5:04 PM

Yea I was watching the weather channel and they should a road that collapsed, roads that were flooded, people out in the ocean surfing, people out fishing and houses that collapsed. That was really bad this past weekend. I couldn't believe what I was seeing. I would watch it before I went to work then put it back on when I got home to see what was happening.

Tender Heart, I watched it constantly on the weather channel over the weekend. Yeah people are crazy to out there surfing in a hurricane. Thank God, it wasn't a bad a Katrina...