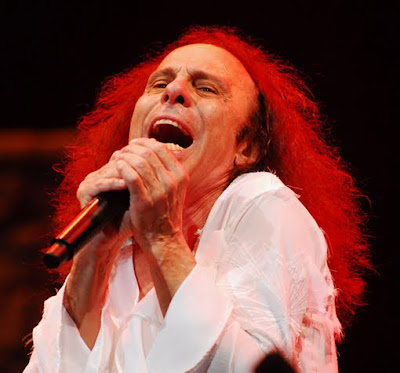 Ronnie James Dio, whose soaring vocals, poetic lyrics and mythic tales of a never-ending struggle between good and evil broke new ground in heavy metal, died this morning, according to a statement from his wife and manager. He was 67.

Ronnie James Dio rose to fame in 1975 fronting Rainbow with guitarist Richie Blackmore from Deep Purple, bringing tunes like "Stargazer", "Man on the Silver Mountain" and "Long Live Rock and Roll" to life.

In 1980, Dio replaced Ozzy Osbourne in Black Sabbath. Reviving the band, they released the critically acclaimed Heaven and Hell album. That time spent with the band was short lived.

In 1982, Dio formed his own band, Dio with former Sabbath drummer Vinny Appice. There they released some more excellent material such as "Holy Diver", "Rainbow in the Dark" and "The Last in Line"

Since then, Dio returned to Black Sabbath two more times before renaming it Heaven and Hell.

Last summer he was diagnosed with stomach cancer and was receiving treatment in Houston. He seemed to be doing better. Until this morning when I heard this.

His wife and manager Wendy Dio, released this statement-"Today my heart is broken, Ronnie passed away at 7:45am 16th May. Many, many friends and family were able to say their private good-byes before he peacefully passed away. Ronnie knew how much he was loved by all. We so appreciate the love and support that you have all given us. Please give us a few days of privacy to deal with this terrible loss. Please know he loved you all and his music will live on forever."
Posted by drewzepmeister at 4:05 PM