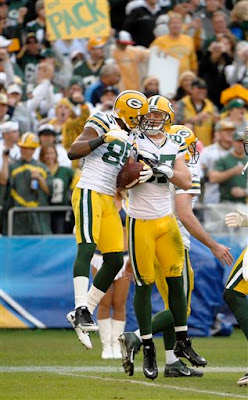 More on the game here.
Posted by drewzepmeister at 7:14 PM

Yea the game was great. But the second have the defense got a little sloppy letting the Chargers get two touchdowns to catch up.

Rodgers did a great job with that long pass to get to the four yard line. I thought that was awesome. The offense was on fire yesterday.

Agreed Tender Heart. Yeah, the defense got a little sloppy there at the end, creating a nail biter of a game.