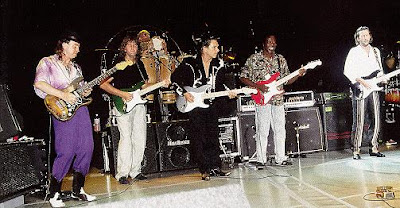 It was twenty years ago today that the legendary guitarist Stevie Ray Vaughan passed away. He was one of the greatest rock and roll blues guitarist ever lived. Never before I've heard such an incredible guitar player. Only a few can match his brilliant style and capture the emotion he had in his playing. He was one of a kind.

Stevie Ray was killed in a helicopter crash nearby Alpine Valley Music Theater in East Troy, WI (which is about a 45 minute drive to the west of Racine) The copter crashed into a nearby ski hill in the dense midnight fog. Also killed in the accident were four members of Eric Clapton's entourage and the pilot. They were heading for Chicago. Details on the crash here.

Earlier in the evening, Stevie Ray jammed to a sold out show with guitar gods that would have scorched the Earth with blistering passion. Eric Clapton, Robert Cray, Buddy Guy and Stevie Ray's brother Jimmie were present on the stage! THAT would be a wonderful sight to see, if I would have went.

Yeah, I was planning on going, but bowed out because I already had spent a bundle on earlier concerts that were at Alpine Valley that same summer. I already had seen Rush, Aerosmith and Robert Plant.

Fortunately and ironically, I had gotten my hands on that final performance. It may not be the best show SRV ever played, but it is worthy of a bootleg. I highly recommend getting this one. Here is the setlist.


Even though I didn't go, I will always remember Stevie Ray for the great guitarist he is and the impact he made in my life.
Posted by drewzepmeister at 6:16 PM

This I think is one of your best blog's. You really went into alot of detail, getting picture's and the music. I really love this one.

Did you include a link to the bootleg that you got your hands on???