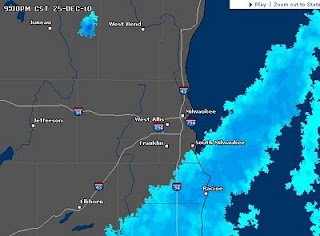 Just got home from being Up North a couple of hours ago...I had a great time among my family and friends! Presents, great food and good times!
The weather was perfect for travel. Traffic was basically light, not a problem there. The roads were clear both ways, ...until I got close to home.

As we turned from Highway 100 (just south of Milwaukee) on to Highway 32 towards Racine we were in for a surprise! SNOW! Lots of it! About six inches of the white stuff covered the landscape-including the streets. The plows were not even out yet! Kinda scary driving through that shit...

With no snow in the forecast, I immediately recognized it as lake effect snow... What is lake effect snow? Lake effect is best described a production of cooler atmospheric conditions when cold winds move across long expanses of warmer lake water, providing energy and picking up water vapor which freezes and is deposited on the leeward shores. In other words, snow bands forms over the lake that dumps huge amounts of snow over a centralized area. It often happens suddenly, without warning and very difficult to forecast. It's a common phenomenon around the Great Lakes region. Not so much here, but places like Syracuse, NY and Gary, IN have gotten dumped as much as four feet of snow in a matter of hours on a more periodic basis. I wouldn't want to live in those places! 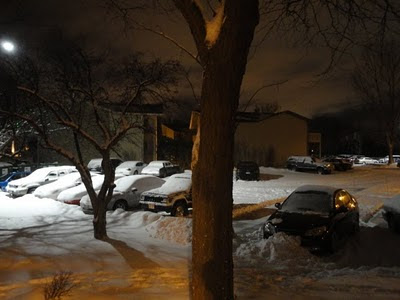 Posted by drewzepmeister at 1:00 AM