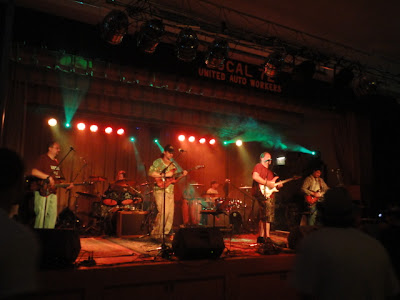 Yesterday was my birthday...To treat ourselves, we to see one of Southeast Wisconsin's best local acts, Cosmic Railroad, at their Family Gathering Pre Show Party. Located at the Local 72 Union Hall in Kenosha, the band pulled out an excellent show!

This is how the night went...

Doors to the place opened at 8:00. Looking around from the parking lot, I could see the usual tye-die hippie attire. This had to be the place...The first band that played was Terry n' the Front. From the first few bars of the Grateful Dead's "Feels Like a Stranger", I knew this going to be a long night. Five hours of music-with no place to sit down. Not wanting to hear another chessy Dead tribute band, we went back to the car and waited out the first band.

The second act, Asparagi, didn't fare any better in my eyes. Taking on a darker sound, this jam band sounded forced. The drums were too loud, drowning out the guitars. The singer seemed to be shouting into the microphone. Disgusted, we went back to the car to wait Cosmic Railroad to begin setting up.

Churning out free flowing, laid back sounds that immediately took me into a cosmic experience, Cosmic Railroad utilizes three guitar players, two drummers and a bass player. Cosmic Railroad is surprisingly unheavy while still utilizing all the guitars for some nice interplay. These guys listen to and feed off one another without going over the top. The teamwork of the two drummers is absolutely incredible, locking into a rhythmic groove that is addicting.

To describe Cosmic Railroad is rather difficult. The best way I could say it is, the Grateful Dead meets the Allman Brothers and Phish without the keyboards. Their catalog consists a different setlist each time they play. The band leaves up the moment to pick the next song. This is where you can see their mastery. As the night moves on, they continue to pick up steam, and things really start to roll. They'll do a Dead tune like "China Cat Sunflower" that would roll into an original tune of theirs like "Carolina" before segueing into the Phish-like epic of "Marco Polo" Then somehow, you're hearing "China Cat" again.

Just who is Cosmic Railroad? Well, they are a jam band based out of southeastern Wisconsin, forming in sometime in 1999. I remember seeing them several times playing in dives in the early 2000's. Each time I saw them, I noticed their fan base getting bigger and bigger. The past few years, I've noticed them playing in festivals all over the Midwest, including appearances in Jamaica. I would not be surprised (in fact, I hope they do) if they do get a recording contract.

The line up hasn't changed for them ever. The band consists of :

Here's one of my favorite tunes from Cosmic Railroad-Carolina.

For more information on Cosmic Railroad, check out their website.
Posted by drewzepmeister at 4:11 PM