I've Got the Tickets! 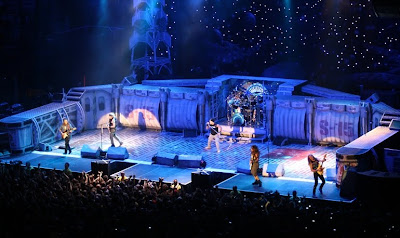 The tickets finally arrived in the mail a couple of days ago. After some considerable thinking, it was decided-you've guessed it, Iron Maiden with special guest Alice Cooper. The show will be at the Marcus Amphitheater on Summerfest grounds on July 4th. Rod Stewart and Stevie Nick's show at the Bradley Center in Milwaukee was considered, but ticket prices going for $150 to $600 a piece was just too damn expensive. Phish was practically sold out.

This will my first heavy metal show since 1991's disaster with Guns n' Roses and Skid Row at Alpine Valley. Rowdy fans tore up the sod in the lawn seats and chucked them into the reserved seats where I was standing/sitting. It literally rained dirt at the show! Fights broke out. It was near riot. Of course, singer Axl Rose didn't help matters by egging the crowd on... My ex-wife and I left the show before it ended. I swore I never attend another metal concert after that one. Until now. I'm hoping for a wiser, older and more mature audience this time around.

Anyways, Iron Maiden plans on bringing back some of their older classic tunes for this tour, culling mostly their 1988's synth heavy Seventh Son of a Seventh Son album. It's not a bad album, not their greatest either. I'm hoping to hear some stuff off their Powerslave album like their 13 minute epic masterpiece "Rime of the Ancient Mariner" and "Hallowed be Thy Name". Any rate, it should be a good show.

The tickets I've got are decent. I've been to the Marcus Amphitheater quite a few times. There really isn't a bad seat in the house. My seats are in the rear reserved (yellow), section 8, aisle K seats 39 and 40. For $70 a piece, these are not too shabby. 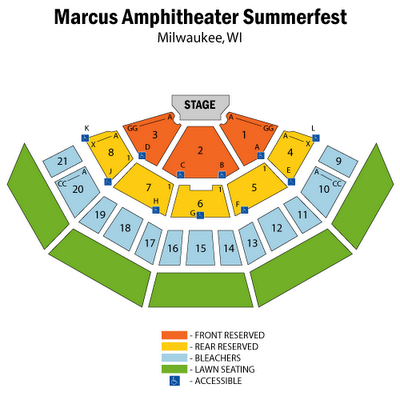 I will be doing a review on the show....
Posted by drewzepmeister at 7:45 PM