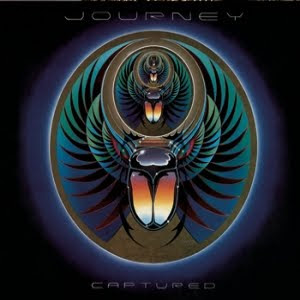 After reading a review on Tender Heart's blog on Journey, I got a little inspired to do one of my own. Well, it least on their 1981 live release, Captured.

Well, "captured" live on various dates during their 1980 Departure Tour, this album is an excellent documentation of their live sound! Admittedly, before I got this album, I thought their live recordings would be similar to their studio creations. How wrong I was! Imagine my surprise to hear all those fiery solos, improvisations and the energy of the music. Unbelievable!

Remarkably up-tempo and upbeat, the energy can be felt by both the band and the audience that they played for. By staying away from cheesy versions of their hits, the band improvised and even stretched the tunes out a little longer, making this album feel a concert full of talented musicians! Makes me wish I had seen them in concert that year...

What a talented group this is! Led by Neil Schon's blistering guitar work, for he rocked out on all cylinders. The riffing he supplies on tunes like "Where Were You" and "Line of Fire" borders on heavy metal, while "Walks Like a Lady" has some superb blues solos in it. Ross Valory bass is quite exceptional as he thumbs it up on the hit, "Wheel in the Sky". Jazz influenced drummer Steve Smith has a monster drum solo on "La Do Da". Greg Rollie, the once voice and ivory picker for Santana, who's baritone pipe swoons impressively through "Just the Same Way" and "Feeling That Way". The keys he pounds compliments Schon's guitar to a tee, especially on "Walks Like a Lady" (Yeah, I've noticed more and better keyboard work here than his replacement Jonathan Cain ever did) And Steve Perry? Oh God...his tenor vocals swoons and sways me, sending shivers down my spine at times! Never before I heard great singing like this.

The one tune that really got me was their concert favorite, "Dixie Highway". That one really blows me away! The band seemed to pull all of their talents together and smacked the audience with a killer here. There's the ultra tenor spine tingling vocals, a smokin' keyboard solo to match the fire from Schon and uplifting time changes all in a neat package.

If you're a Journey fan-get this album! If you do have it...CRANK IT!
Posted by drewzepmeister at 8:25 PM

I am glad that I inspired you to write this. I do like there live music. This album is a really good one. As always you wrote a great revue about this album. I hope to read more revues from you.

Tender Heart, I have chock full of reviews to write. All I need are the cogs in my head to spin....

I used to have Captured on vinyl years ago and it was a fun album although I was disappointed that the version of Lovin Touchin Squeezin wasn't the same as one that appeared on the Anyway You Want It EP which came out on import only but our radio played it.

I'm rediscovering the Journey back catalog and even though Escape had Don't Stop Believing and Open Arms still find it not one of my favorites although Frontiers has grown on me since the CD adds bonus cuts such as Only The Young to which I went out and brought.

And I hear ya on writing reviews, they seem to take forever for me to write as well. ;)

Crabb, one great thing about live versions of tunes is the opportunity to hear a different variation. I love improvisations!

I have all the Journey albums (except for Look in the Future and Arrival)Honestly, I prefer the Greg Rollie years with the band.

I'm not crazy about Journey. Neal Schon is a brilliant guitarist, but I believe on a lot of Journey's 80s material he "dumbed down" his playing a bit. He really is capable of so much more and so much better. I've got a live soundboard bootleg of him and Paul Rodgers in Vancouver back in 1993. They focus predominantly on the blues but play a bit of Rodgers solo material and iirc a Bad Company song or two (it's been awhile since I listened to it). I'd heard that Neal Schon was a better guitarist than he really showed himself to be in Journey but that bootleg was the first time I actually heard it for myself firsthand... I concur with that assessment. I've also heard that part of the reason he left/was kicked out of Santana was that Carlos felt threatened by him as he felt Schon either already was or had the potential to be a far better guitarist than he was. He didn't want to be upstaged in his own band.

Interesting insight, Perplexo. An angle well taken and you may right about the "dumbing down" of Schon. I've noticed that on the live recordings I've gotten my hands on, Schon shines brighter than in the studio.

Have you heard of Abraxas Pool? It's a group Neal Schon & Greg Rolie put together in the early 90s (when Journey was on one of their hiatuses) featuring former Santana members. I believe they put out one album. I haven't heard it yet but I noticed it's well reviewed on Amazon.com. It's described as a cross between Santana and early Journey (I believe the reviewer who said that was referring to pre-Steve Perry Journey).

Abraxas Pool? Never heard of them. They sound like an excellent band to be getting into, seeing I'm fan of both Santana and early Journey. Thanks for the heads up Perplexo!

You might also want to check out Gregg Rolie/The Gregg Rolie Band. He's put out some interesting material since his departure from Journey back in 1980 or 81.

Also there's Robert Fleischmann. He was Journey's vocalist prior to Steve Perry (only for a few months in 1978). He didn't record any albums with them (but one of his demos ended up on the Journey box set, Time3, a few years back) but he's got a solid voice and listening to him might leave you wondering, "What if?!"