Thoughts for Food 2011-The Review

Like tradition, I made way down the annual Thoughts for Food Benefit. So far, I've lost track of how many times I have attended this event. This year the benefit was less crowded, yet the music was still great. 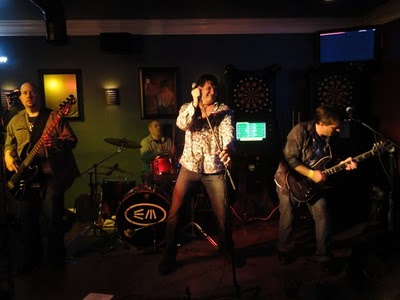 The first band we saw was Identity Crisis at Michigan Pub. I have heard of these guys before, but I've never have seen them perform. Not bad at all I say! They remind me of some the '90's grunge bands like Alice in Chains. Of course, what did they play? Alice in Chains "Man in the Box". They also kicked out tunes like Led Zeppelin's "Good Times, Bad Times" and Stone Temple Pilots' "Sex Type Thing" They impressed me with their heavier version of Tom Petty's "American Girl". The singer (I never did his name) got a great set of pipes. Reminds me of a higher tenor version of the late Alice in Chains' singer, Layne Stanley. These guys I wouldn't mind seeing again, if an opportunity presented itself. I wonder if they ever played at the beach. 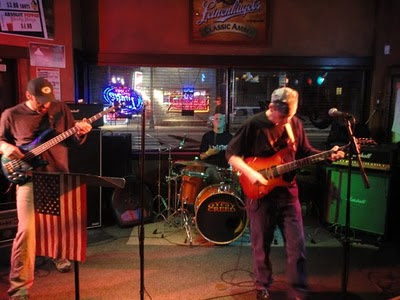 Decisions, decisions! Whom to see next? Two of my favorite local acts were playing at the same time. Lyden Moon at Coaster's and Mean Jake over at Chartroom Charlie's. We decided to split the shows in half, first stopping at Coaster's to see Lyden Moon.

Lyden Moon's Joe Satriani-like guitar work is legendary! STILL blows me away every time I see them! The finger tapping techniques and whammy bar flying solos! AMAZING! The rhythm section...bassist Joel Thierfelder and hard hitting drummer Dan Jung provide an excellent backbone for the instrumental progressive time changes the band plays! Although they have released a few CD's, I'm still scratching my head to why these guys haven't received the national recognition they deserve. 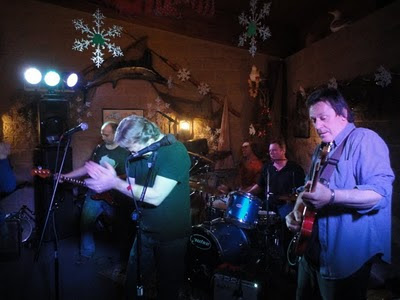 By the time we made it to Chartroom Charlie's to see Mean Jake, the place was PACKED shoulder to shoulder with people. Standing room only! Not surprising for these local favorites, it was the same way last year. This hard rockin' bar blues band, led by singer Craig Aude and riff master Brian Kubowski, slammed through catchy selections like Creendence Clearwater Revival's "Green River", Johnny Cash's "Ring of Fire", Van Morrison's "Gloria", the Stones' "Under my Thumb" and the Kinks' "Who'll be the Next in Line". Yes, another blistering set from these guys! As usual as every time I see them, smiles were on the faces of the audience as many of them were dancing in aisles. Although I didn't see their full set, I pretty sure I'll see them at the beach again this summer. 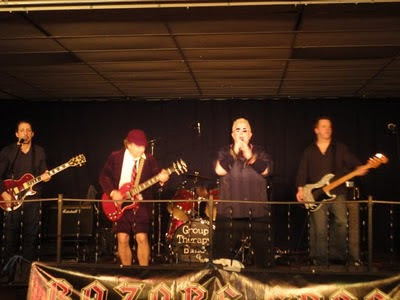 I've been on an AD/DC phase lately. Never was really into them in years past, somehow they inched their way into my collection. Maybe it's that they've gained classic rock status or I'm just recently viewing them as a fun band. Nevertheless, I saw these guys before last October at the Party on the Pavement. Razor's Edge, an AC/DC tribute band. The singer, John Muse doesn't look anything like Brian Johnson nor the late Bon Scott, yet he sure the hell sounds a lot like them. The guitarist, Bob Beaudoin was dressed up in Angus Young's trademark school boy outfit, rocked the house down with his fiery solos as the band plowed through AC/DC's list of classics like "Jailbait", "Hell's Bells", "Highway to Hell", "Dirty Deeds Done Dirt Cheap" and "You Shook Me all Night Long". The show's highlight was the bagpipe jam during "It's a Long Way to the Top (If You Want Rock n' Roll)" The cool thing about the show, it brought people together, young and old, to celebrate AC/DC. 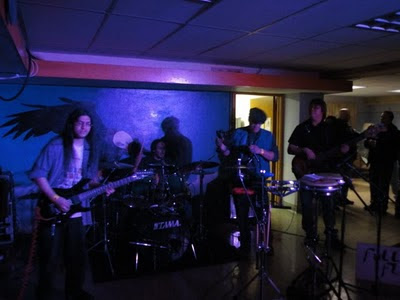 The last band of the night was at downstairs of the Eagles club. We saw my friend, Aaron James' band, Full Flavor. I haven't had the opportunity to see these guys often. Wish I did! Aaron is a red hot guitar player, who's band captures the classic sounds of Aerosmith's "Sweet Emotion", Stevie Ray Vaughan's "Pride and Joy", Doors' "Roadhouse Blues", Beatles "Twist and Shout" and Santana's "Soul Sacrifice" and rolls it up in a Latino beat. These guys are a must see for a beach event!

All in all, for a good cause, we had a great time and met a few people we knew. The crowds were not as bad it was last year. Can't wait till next year's benefit.
Posted by drewzepmeister at 11:43 AM

I am glad you both enjoyed yourself. It sounded like you had a great time.

Speaking of music, my cube-mate mentioned a band he used to go see live at some of the seedier bars in the south Chicago suburbs called The Hounds. They apparently released a few albums. He has their debut album, Unleashed on vinyl. The album was never released on CD but through some diligent searching I was able to find a decent rip from vinyl to mp3. The music is very much in that late 70s hard rock vein. If you're interested drop me a note and I'll share.

Perplexo-I'm always up to hear anything that I haven't heard of...:)