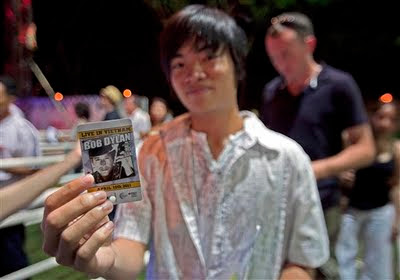 In a country were rock and roll is almost non existent and controlled by the government, it is a surprise to hear Vietnam War protesting icon Bob Dylan to perform in Vietnam.

Here's the story as follows-

The 69-year-old Dylan took to the stage in the former Saigon on Sunday, singing such favorites as "A Hard Rain's a-Gonna Fall" and "Highway 61 Revisited."

Only about half of the 8,000 seats were sold to a mix of Vietnamese and foreigners who danced on the grass in the warm evening air as Dylan jammed on guitar, harmonica and the keyboard at RMIT University

With more than 60 percent of the country's 86 million people born after the war, many young people here are more familiar with pop stars like Justin Bieber, yet, still, Dylan's music during the tumultuous 1960s touched thousands of people in both nations.

Dylan is one of the top foreign artists to perform in Vietnam, where big-name concerts are still rare and the Communist government maintains strict controls over expression. Dylan's song list had to be preapproved by the government, but promoter Rod Quinton of Ho Chi Minh City-based Saigon Sound System said no restrictions were placed on the extensive set list submitted.

Posted by drewzepmeister at 8:33 PM

Bob Dylan is not one of my favorite artists. I like his music but there is something about him I do not like. He does have a lot of good music. But this is one I would not go to see in concert.

This was a real good set list for his concert. There are a lot of songs on the set list I do like. I am glad the fans had a real good time.

I think maybe he waited to long to go back assuming the government would have let him in. Like you mentioned, most of them probably do not even know who he is. Never been a fan of him. A couple of songs are OK, but I would rather listen to Jimi, Janis or the Doors.

Given the context of his music, I think it's quite surprising that his able to play in places like Vietnam and China...