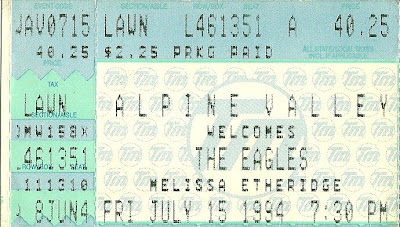 It's been a long time since I've done a bootleg review. This time it's about a concert that I've been to. Yep, I do have FOUR bootlegged concerts in my collection that I've been to. Two of them are Rush, a Robert Plant show and this Eagles one. (No, I didn't bootleg any of these shows, copies of them fell into my hands).

1994 was an impressive year for concerts. Bands like the Rolling Stones, Pink Floyd, U2, Pearl Jam, and the Eagles were on tour that summer. With tickets prices growing out of control, we opted to see one concert that summer. After much deliberation, the decision fell on to the Eagles, for it was their reunion tour.

A wise choice, I may say (although I regret not seeing Pink Floyd)! The concert ended up being one of my favorite shows that I've been to.

We pulled into the grassy parking lot of Alpine Valley in our Subaru station wagon on a sunny Friday afternoon. Temperatures were warm and comfortable. Pulled out our grill and beer to do some tailgating. As the burgers sizzled on the grill, we were introduced to a couple from Kenosha. As we were sipping the cold brewskis and playing frisbee in the parking lot, the vibes became more evident. The peaceful, easy feeling vibe.

And that vibe lasted into the night.....

Melissa Etheridge opened with an impressive set showcasing her latest tunes off of her Yes I Am album. Her vocals were top notch! The tunes like "Come to My Window", "I'm the Only One", "Bring Me Some Water" and "Yes, I Am" sent shivers down my spine confirming Melissa is the real deal!

As the sun was setting between sets, the vibe was getting stronger as I was laying there on my blanket feeling very calm. Then I heard explosions! Thunder! The roar of the crowd as the opening bars of "Hotel California" filtered through the dusky sky. The show was on! As roar died down, magic was filling the air... I could hear the entire audience singing along to the words! It was so surreal to hear this choir like effect on classics like "New Kid in Town", "Lyin' Eyes" and "Tequila Sunrise". People were dancing like lovers, swaying and singing along with the music. The crowd was cheering loudly for Joe Walsh's crazy antics (like wearing Dr. Suess' Cat in the Hat hat on "Average Ordinary Guy").

For the next three hours and two sets, the band consisting of Don Henley, Glenn Frey, Timothy B. Schmitt, Joe Walsh and Don Felder, plowed through tunes not only from the Eagles, but solo songs as well! It was quite surprising to hear the Eagles play "Rocky Mountain Way", "Boys of the Summer", "Smuggler's Blues","Dirty Laundry", "Life's Been Good" and "Funk#49".

When I play back the tape of the show, the hairs on arms stand straight up remembering the good, peaceful vibes and the magic of the show. I still wear the smile on my face when I walked up the hill after "Take it Easy" closed the night....

Posted by drewzepmeister at 9:41 PM

As always another great post. I am very happy that you enjoyed yourself at the concert. That was a great set list that they did. I wish I could have seen them in concert. I really like the Eagles.

Hopefully someday you will Tender Bear!

Your blog is very Informative.

Your blog is very impressive!!Nice post. This post is different from what I read on most blog. And it has so many valuable things to learn. Thank you for your sharing!
ltc-travel

Is this bootleg video or audio? and I was wondering if you would maybe wanna trade for it? especially if it's video. Could you email me at brandonwhitford2@gmail.com please? thank you and have a good one

I am watching one their Cold Day from Hell concerts at Burbank Studios on Axis.
Brings back the excellent time at Alpine Valley. Thank you for posting @