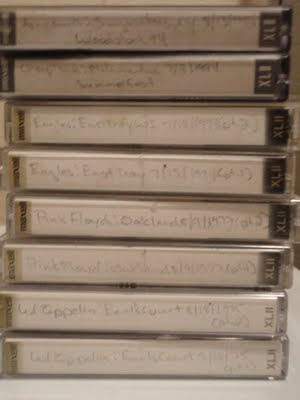 Ever since I set up my boom box in front of the TV to record an MTV special on Asia in concert from Tokyo, I've been fascinated with bootlegs. Finding, collecting and doing research on them has been a hobby for me for years.

So what are bootlegs? They are unauthorized live recordings by an artist. They can not be found in stores nor anywhere music can legally be sold. Many of these recordings are sold illegally through online sites. None of profits go to the artists' themselves. However, I'm not interested in any sharp nor form in the business of dealing tapes for cash. Music is priceless.

Getting them was rather interesting. I never bought any from the online sites that are strewn over the internet these days. I never trusted these sites for various reasons. Instead I have recorded them off of the radio, hooked up my tape deck to the VCR from the TV specials like MTV Unplugged, Live 8 and the Woodstock '94 pay per view and even hooked my tape deck to the computer to record downloads of the Internet from sites like the now defunct WinMX. Most of them I've gotten from are from friends. How they got them, the don't ask, don't tell rule applies.

So why all the fuss over bootlegs? Yes, I love live recordings from any artist. To me, they are extensions of the studio work. Where in the studio, the artist can slice and dice to perfect a song, in concert, it's do or die in one take. I've noticed though, the live recordings released by any artist are often "doctored". Meaning that they are mixed, overdubbed or whatever in the studio for release. Kiss Alive! and Led Zeppelin The Song Remains the Same are perfect examples of that. Whereas a bootleg, anyone can get the concert feeling as if you were in the show yourself-flaws and all. The flaws are gives the music its character...

Bootlegs are not perfect either. The sound quality can be barely audible to excellent. Blame can be given to whomever is recording the show and the technology they use. I've noticed in late '60's and the early '70's the recordings are often rare and muddied, while shows later on tended to be a better quality and more common. Thinking about it, a big and bulky tape recorder in smaller venues being stalked by roadies on the rampage versus compact and updated equipment in stadiums. Sometimes one can't be too picky, after all it's a bootleg. 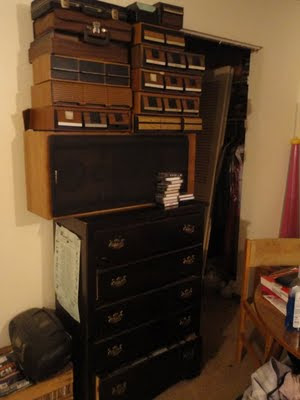 However, there are a few bands that do promote tape trading. Jam bands like the Grateful Dead, the Black Crowes and the Allman Brothers have set ups at their show where can one pick up the finished tape or disc after the show.

Over the years, I've picked up unbelievably awesome and weird recordings. Many of them that captures the true essence and the spirit of the band. There's the Led Zeppelin's Earl's Court run in London at end of their 1975 tour. To this day, I still wonder why at least one of the shows hasn't been released. Aerosmith's Woodstock 1994 show was spectacular! Robert Plant's show in Amsterdam in 1993 was a real trip. A Traffic show at Summerfest had face melting guitar solos on "Dear Mr. Fantasy". Pink Floyd blew up a pig at Oakland in 1977. The Counting Crows wowed me in Chicago in 2004. The Allman Brothers blew my mind at Holmdel, New Jersey with their dual guitar attack on "Jessica" in 1994. I could really could go on and on about all this. I guess I'm gonna have to to more bootleg reviews...

So is your take on bootlegs?
Posted by drewzepmeister at 10:24 PM

Love bootlegs! I prefer the soundboard bootlegs because the sound quality is superior. They basically sound like legit released live albums but without the post-show studio tweaks to polish the show and remove the "warts" that give live shows their character. Most of my boots are of Chicago, Toto, or Dream Theater.

I like the bootlegs because this is the live version of the songs. This way when you listen to the music it kind of seems like you are there at he concert.

I hope in all of them drawers are not all bootlegs tapes. If so I know how much you are into music.

I remember getting the recording of Stevie Ray Vaughn's last concert at Alpine Valley and thinking I had gold since he died that night. I also had Bonhams last concert in Europe. That one did not sound very good. I have not owned a bootleg since I made the switch from cassettes to CD's. But I too love live music. I know you know this but for those who don't, Mike Portnoy has amassed and entire library (he had to expand his house) of Dream Theater's concerts and appearances over the years. In fact he asks that if you record a show,, that you send him a copy for his archives. Lars Ulrich would just slap you with a lawsuit :)

Perplexo-Soundboard bootlegs ARE niiiice. I have soundboard Zeppelin show from Fort Worth, Texas during their 1973 tour. Sounds like The Song Remains the Same without the audience. Yet, I tend to lean towards the audience boots, because of the warmth and ambiance of the audience interaction. However, I've run into boots that have WAY to much audience noise.

Tender Heart- Not all, the bottom three drawers are packed with boots.

Brett-I do have both SRV's and Bonzo's final shows. I really liked "Stairway" on that one. It was a bit longer than usual, the band sounded like they were having a good time.

Thought I throw my 2 cents in.

Don't have many bootleg CDs in my collection, I found a Black Crowes New York 1990 show on CD at the pawnshop for a dollar and I think it came from the soundboard right around the time Shake Your Money Maker came out. Also have a 93 Goo Goo Dolls live performance taken off a FM broadcast.

The record store I used to work at, used to sell bootleg cds for 25 bucks a pop and I recall he had stuff from Nirvana (before K.C. shot himself) that flew off the racks, Metallica always sold as well as the Grateful Dead. For old rock, I have the Who live at the Vic which is a rough recording of the Life House songs that became Who's Next. The ones I did buy was The Gin Blossoms In Bloom to which some of the songs would make it to various A and M EPs and promos. And Del Amitri's Driving With Your Boots On Bootleg from 1995.

Most of the Zeppelin stuff was rough sounding but the Goos Gin Blossoms and Del Amitri boots are soundboard quality.

My favorite bootlegs are ones featuring unique line-ups of bands or alternative versions of their songs.

I've got an audience Toto bootleg from 1985 featuring Fergie Frederiksen on lead vocals. 1985 was Fergie's only tour with the band before being replaced by Joseph Williams. It also features all 3 of the Porcaro brothers (Steve on keyboards, Jeff on drums, and Mike on bass).

I've got a soundboard Chicago bootleg from 1994. Vocalist/keyboardist Robert Lamm was suffering a sore throat so Bill Champlin sang Saturday In the Park and Jason Scheff sang Beginnings so that one is kind of cool.

And I've got an "official" bootleg of Dream Theater performing their debut album in its entirety on the 15th anniversary of the album's release. For the encore former DT members vocalist Charlie Domenici and keyboardist Derek Sherinian (now in Black Country Communion with Jason Bonham, Glenn Hughes, & Joe Bonamassa) joined DT on the stage for a couple songs.