The Sky is Crying 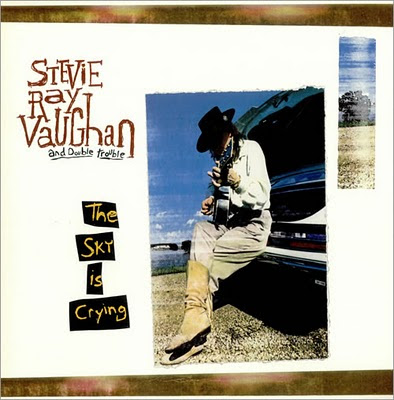 There are many music lovers out there at that would claim Jimi Hendrix as THE guitar god. That may be case, yet blues legend Stevie Ray Vaughan sits on his right hand as a faithful disciple of Hendrix. Hendrix may have opened the door for generations of guitar players exploring the boundaries of the instrument, yet Stevie Ray sent it the the limitless heights of the stratosphere.

Note for note, each sound Stevie Ray creates on his beat up Stratocaster is worth it weight in gold. Always playing with unbridled passion and emotion, Stevie Ray somehow reaches into the heart and soul of the listener-whether it is playing at blinding speed or the slow down steady blues. Not bad at all from guy who sneaked into his older brother's room just to self teach himself on the guitar.

On the 1991 release of The Sky is Crying illustrates all that and more. The posthumously assembled ten-track outtakes collection actually proves to be one of Stevie Ray's most consistent albums, rivaling to 1989's In Step as the best. Compiled by his older brother, Jimmie Vaughan (of the Fabulous Thunderbirds), these songs were recorded in sessions spanning from 1984's Couldn't Stand the Weather to his last album, In Step and were left off of the albums for whatever reason (or, in the case of Soul to Soul's "Empty Arms," a different version was used).

What makes the record work is its eclectic diversity --Vaughan plays the slide guitar on "Boot Hill" while "Life by the Drop" was done on the acoustic. He smokes on the slow blues of "May I Have a Talk With You" and the title track just as much as on the up-tempo Lonnie Mack cover, "Wham" Holy Cow! Talk about blistering guitar work there! Then he shows the jazzy side of his playing on and Kenny Burrell's "Chitlins Con Carne. The buzz on the amp on Hendrix's "Little Wing" intro slowly crawls in a wailing guitar solo that is literally mind blowing!

But it's not just musical diversity that makes the record work, it's also Vaughan's emotional range. From the morbidly dark "Boot Hill" to the lilting "Little Wing" to the exuberant tributes to his influences -- Lonnie Mack on "Wham" and Albert King on "The Sky Is Crying". Stevie Ray makes the material resonate, and in light of his death, "The Sky Is Crying" and the touching survivor-story ballad "Life by the Drop" are two of the most moving moments in Stevie Ray Vaughan's oeuvre.

Posted by drewzepmeister at 5:00 PM

Stevie Ray's music is awesome. I haven't heard his music in a long time and when I listened to the song you have on here it was like I can't believe it. The main thing is I can't believe he is gone. Their is not a musician out there that can ever replace him the way he played the guitar. Talk about someone playing his music from the heart that was Stevie Ray. You can hear it in his music with every cord he plays.

I am reading a book about him right now and I will be doing a review of the book.

Tender Heart, your words "You can hear it in his music with every cord he plays." springs the truth about SRV. Never in my life I've heard so much passion in music than SRV.

I can't wait read your review on SRV!

I loved this album I haven't listened to it in years. Time to give it a play again. Loved Little Wing and Life by the Drop. But it's all good.