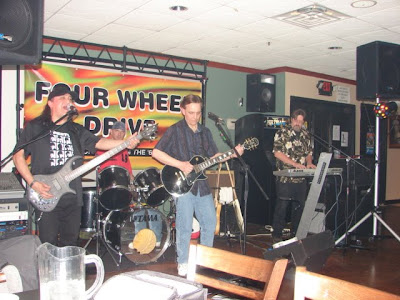 Last week, a good friend of mine, whom I had not seen in 25 years called me and invited me to see a band last Saturday night. The band, Four Wheel Drive is one of Milwaukee's favorite local bands. Well known for their play of of classic rock tunes from the '60's, '70's, and '80's, band the does a great job of performing them. They roared into their opening song, "I Just Want to Make Love to You" sounding very close to Foghat's version without the slide. Drummer Tim Wolf held a solid beat through out the night. Keyboardist Duane O' Reilly tickled the ivories, pulling off some vibrant sounds on tunes like "Riders on the Storm" and " LA Woman". Rhythm master Andrew Lee has a flair for showmanship, often stepping into the crowd to play the bass. The band's centerpiece David Ellman, showed off his impressive guitar work- working man's style. He sang with a great voice as belted out the classics.

The dance floor was packed with revelers as the group plowed through numbers from the Romantics, Sweet, and John Mellencamp. My highlights were their version of "Rock and Roll all Nite" and "Surrender" Good and solid fun rock!

I did get a chance to meet the band during breaks between sets. They seem to be down to earth rockers. They spoke pleasantly with the audience and chatting away with friends, bringing a good vibe that filled the place.

All in all, I had a good time. The band played well. If ever want go out and have a good time, and hear some good classic rock this is the band to see! Thanks for the invite B! I appreciate it

Posted by drewzepmeister at 7:05 PM

Is the band's name at all in reference to the comparatively obscure (compared to You Ain't Seen Nothin' Yet and Takin' Care of Business at least) Bachman-Turner Overdrive song, Four Wheel Drive?

Yes, Perplexo. The name was taken from BTO's forth album, Four Wheel Drive. In fact, they played "Takin' Care of Business".