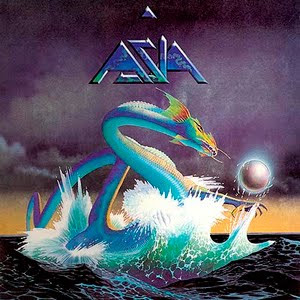 All it took was the sticker on the cellophane wrapper the protected the album. It read- Asia is Geoff Downes, Steve Howe, Carl Palmer and John Wetton. I had heard of these guys before. Carl Palmer is the drummer from the Emerson, Lake & Palmer fame. John Wetton was the bassist/vocalist from bands like King Crimson and Uriah Heep. Geoff Downes was known for his key work in Buggles and the Yes Drama album. My main interest was Steve Howe, the guitarist for Yes. In my hands was an album created by a super group! How excited I was!

Besides, I thought the album cover looked cool!

My excitement didn't last long....The first time I played this record was everything short what I expected. Where was the long jams that I got used to from listening to Yes and ELP albums? The choruses? Awfully repetitious...It felt like I was listening to a washed out progressive rock band heavily influenced by the '80's new wave. I quickly shelved the record in dismay.

Then I read a magazine article about them. I don't remember what magazine it was, but does it really matter? Anyways, as I was reading this article, it was saying something about them not having any individual soaking nor hogging the spotlight. More or less bringing balance to the group. They've got a good point.... I remembered hearing ELP's Works Vol.1 and thought it was WAY too indulgent. C'mon, a 20 minute piano solo? Great...but BORING!

That shed a new light on the record....

Shredding away the pompousness, the band decided to keep it simple and to the point. A great idea if you ask me. Less is more sometimes. The more I listened to this album the more I liked it! This album grew onto me! It soon became one of my best albums of the '80's

This album is basically power prog rock that is suitable for arenas. Sort of like Yes meets Boston, Journey, Styx, Foreigner...and so forth. Tunes like "Heat of the Moment", "Wildest Dreams", "Time Again" and "Sole Survivor" are driven, packing a punch! Mellower moments like "Only Time Will Tell" sounds great without being sappy. Throughout this album each member rises to the occasion without going over the top! The solos are there, but trimmed down nice and neatly. Perhaps this this would have been the new direction for prog rock...

Posted by drewzepmeister at 10:03 PM

Interesting post Drew. It is often the case that initial reaction leads to 'shelving' of the offending LP (tell me about it!) But then a reappraisal years later shows it in a different light. This can go either way - a) It suddenly makes sense, as in your case, or b) you still hate it and it goes in the bin.

Glad yours was an A!

A favorite of mine as well! Asia's 2 most recent albums (since the reformation of the original line-up) are pretty good too but the guys didn't get the memo that it's 2010 not 1982 or 1983 as both Phoenix and Omega pick up right where Alpha left off (Steve Howe left before Astra was recorded so that album had Wetton, Downes, Palmer, and Mandy Meyer).

And if you listen to Yes's Drama album you can hear the seeds of Asia being planted as Howe and Downes sound brilliant playing on that album together. Yes fans may disagree, but I'd argue that of all the keyboardists that Howe worked with in Yes, he and Downes shared the best chemistry... Wakeman, Kaye, etc. may have fit in better with Squire, Anderson, White, Bruford, etc. etc. But Howe and Downes seemed to really mesh well.

That's why I tend to read as many reviews as I can, Music Obsessive. There so many angles looking at music that it surprises me sometimes!

I've heard bits and pieces from both the Phoenix and the Omega albums, Perplexo. From what I heard, I liked! I still yet to pick up the cd's. They are on my list to get.

As far as the Drama album goes, it's better than most of the Yes albums I have. (I have the entire collection) It ranks much better than the first two Yes albums and most of the post 90125 stuff. If Jon Anderson were the vocalist, I put it up a few notches.

Drew: I think your review is a pretty gutsy post, Bcos I think a lotta prog fans were really disappointed by this album -- I know I was.
It's not that Asia's songs were bad -- they were good, commercial pop songs with strong, grabby hooks, especially "Heat of the Moment," "Only Time Will Tell" & "Soul Survivor." It's just that they didn't really take me anywhere -- unlike the best work by the bands that the guys in Asia came from.
I loved all those bands & I admired these musicians, so I wanted to believe the hype, I wanted to believe all the critics were wrong. But the critics were right about this one -- it was flashy progressive pop that was made to get lotsa airplay & sell millions, & that's what it did.
Not that there aren't good things here -- I've always loved John Wetton's smoky voice. But he'd wanted Big Commercial Success ever since the days he'd been in King Crimson. & anyone who heard the 2nd U.K. album, DANGER MONEY, coulda heard Asia's album coming. Wetton's excellent vocals weren't enuf to rescue U.K., & they weren't enuf to rescue Asia, either.
So they made a lot of money, but to get it I think they had to steamroll everything that was distinctive outta their music. This could just be a matter of taste -- I still like all these guys, but I never played Asia's album much after that 1st time thru. Too streamlined, too commercial, not enuf of what I originally listened to these guys FOR.
But please keep going with the album reviews -- you get me thinking every time.... -- TAD.

Thanks Tad, for your encouragement!

Although Asia's debut sounded a bit commercialized as first listen, after taking it at a different angle, I found it to be surprising! Taking away all the excesses in prog rock and this is the final result.