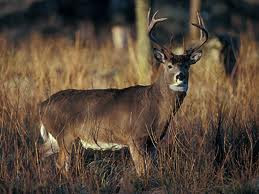 There was a shortage of co-workers at where I work today. Why? Some them took their annual pilgrimage to the northern boondocks of Wisconsin. Deer rifle season opens tomorrow morning. Over the next nine days there will be an ocean of orange dressed hunters filtering in and out of the woods, hoping to get lucky. Some will be driving home a dead deer on the roofs of their cars, others will not.

My Dad is one of these hunters. Every year he goes out there with his buddies and tries to be one of those lucky ones. He's gotten lucky a few times, including a nice (I think) seven pointer. It's something that he's done every year since he was old enough to handle a gun.

I do not hunt. The idea of sitting of an elevated, frozen deer stand, waiting with a .22 just to have a shot at "Bambi's dad" does not thrill me. I'm much to restless for that. However, I'm not against hunting either. It is a necessary "evil" that helps to reduce an over populated deer heard to a more manageable level. With an out of control deer population, the deer are subject to problems like extreme starvation, disease and more frequent auto/deer collisions.

What about the natural predators? We do have bears and wolves here in Wisconsin. The bears are basically omnivorous creatures. They'll basically eat anything, if it's an easy catch. A bear would rather grab an easy meal of grubs, berries and small animals than take down a healthy deer. And the endangered timber wolf? Although Wisconsin has one of the larger wolf populations in the lower 48, it's still not enough to to bring down the heard to size.

So that leaves it up to the hunters to solve the problem. Most hunters I know, not only they love the sport, are wildlife enthusiasts as well. Many of them follow the laws, rules and regulations set by the DNR to the book. Yes, there are a few bad apples. I'm completely against poaching.

Hopefully, my Dad will get lucky this year, I'm craving for venison steak and eggs for breakfast.
Posted by drewzepmeister at 3:35 PM