Funny how I get into music this old. I born in 1966. So I really have little or no recollection to what I was doing back then. I haven't even started school yet! To top it off, I wasn't really exposed to rock and roll then. My folks never had any albums from the Beatles or the Doors. It wasn't till I was a teenager before I stumbled across this music.

Yet when I look back at this age of classic of rock and roll, I find myself imagining being there in a somewhat older form, wishing to have experienced Woodstock. Rock and roll was an experimentation back then. A garage sale of ideas, evolving, not this big corporate money hungry blather we have today.

So let's go back in time and relive this experience. Shall we? 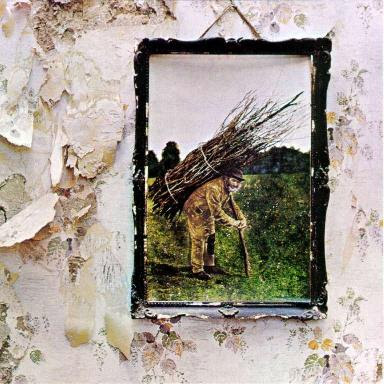 Led Zeppelin Untitled-1971 Let's face it, the first 6 albums from Zeppelin are classic. This one, however, is their Mona Lisa! Page, Plant and the boys pulled out all the stops in this masterpiece, including a battle with Atlantic Records over the album cover. What was considered a bad career move turned to be 22 million worldwide gain in sales! The diversity of tunes like "Rock and Roll", "Black Dog", the folkish "Going to California" and AOR hit "Stairway to Heaven" proved Zeppelin was more than just a passing fad.

Beatles Sgt Pepper's Lonely Hearts Club Band-1967 I had a hard time deciding what Beatles album to make this list. I had Revolver, The White Album and Abbey Road in my mind. This one, however, stands out! Don't get me wrong, all these albums are great! Sgt Pepper's stand out because what it meant to rock and roll per say. The Beatles experimented with multi-tracking here, opening the the floodgates to what is rock and roll today... No longer rock music was just entertainment, it was art!

Rolling Stones Let it Bleed-1969 Another one filled with decisions! Between this, Beggar's Banquet, and Sticky Fingers, it is a hard decision. The Stones were on the roll here! The shimmering "Gimme Shelter", the apocalyptic "Sympathy for the Devil", the bombastic "Brown Sugar", nothing could stop the Stones! Unrivaled by anybody at this point, they still remain a household name.

the Who Who's Next-1971 Yeeeaaaah! As Roger Daltrey screams in unison with Pete Townsend's guitar hammering. This classic masterpiece can make me pump my fist into the air with delight and yet, make me cry...Tunes so great that they found their way on television themes. Quite surprisingly, all came from a scrapped rock opera! 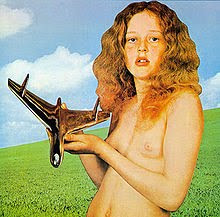 Blind Faith (s/t)-1969 It was love at first sound! Eric Clapton's wailing guitar and Steve Winwood's silky vocals-a great combination that sent waves of euphoria to my brain! Unfortunately, this hailed supergroup released only one album...

Jimi Hendrix Experience Are You Experienced?-1967 Considered by many the greatest guitarist ever lived! Hendrix opened the doors and paved the way for others to follow in his footsteps. Iconic tunes like "Purple Haze","Fire" and "Foxey Lady" helped shape of we think of music of the '60's...

Derek and the Dominoes Layla-1970 An album that is close to my heart. Eric Clapton, Duane Allman and rest of the gang creates an excellent blues rock album! The blistering blues solo on "Key to the Highway" has left me breathless! "Bell Bottom Blues" gives me the goosebumps. Who could forget the epic title track? Not only the lyrics are beautiful, the piano coda is awesome!

Creedence Clearwater Revival Chronicle-1976 I'm going break a few rules here. CCR albums tend to be inconsistent. So, picking my favorite CCR album would be difficult. Chronicle offers pretty much the best of what I love from CCR. John Fogerty's guitar playing and songwriting are unbelievable! This Sacramento, CA based band can make you feel like they are from the swamps of the South!

the Doors (s/t)-1967 Although tunes like "LA Woman" and "Riders on the Storm" are my personal favorites from the band, their debut album is one best one the sums the best of Jim Morrison's baritone poetry. Tunes like the hit "Light my Fire" to the Oedipal ending of the 12 minute epic of "The End". There is not a wasted note here! 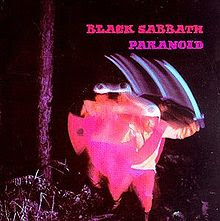 Black Sabbath Paranoid-1970 The Godfathers of heavy metal! Ozzy, Tony Iommi and the rest of the gang creates that doomsday grungy guitar and satanic lyrics to the masses! This sound influences many heavy metal bands to this day to do the same!

Yes The Yes Album-1970 Guitarist Steve Howe joins the band after their dismal first two albums. He gives the band the much needed color and landscape the band sorely needed. The tunes got longer and craftier. A picture was being painted!

Cream Disreali Gears-1967 There are words spray painted on the underground station walls in London "Clapton is God". It's easy to see why. Clapton sure has made his presence felt in the '60's and '70's. This time with a powerhouse trio of Cream! Kicking it with Ginger Baker and Jack Bruce, they bring their own brand of psychedelic blues to the world! Awesome!

Grateful Dead Workingman's Dead-1970 The Grateful Dead was always more of a live band than a studio act. Even so, both of the American Beauty and Workingman's Dead albums creatively brought some killer folk and country influences to the masses-often lacing them with drug references. More importantly, the Dead was a huge part a the hippie sub culture that prevailed during that time!

Traffic The Low Spark of the High Heeled Boys-1971 There are SO MANY great Traffic tunes out there! Tunes like "Dear Mr. Fantasy" and "Medicated Goo"are my favorites. For some reason, the Low Spark album stands out for me. Could it be the great guitar work on "Light Up or Leave Me Alone" of the memorizing piano of the title cut? Find out for yourselves! Prepared to surprised! 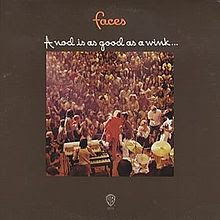 the Faces A Nod is as Good a Wink...to a Blind Horse- 1971 Straight forward barroom blues rock at its best! No frills, no filler, no junk! Grab a beer, pull up a chair and let your foot do the stomping! Rod Stewart, Ron Wood and the rest the gang delivers a one/two punch that will knock your socks off!

Big Brother & the Holding Company Cheap Trills-1968 Initially titled and rejected as Sex Dope and Cheap Thrills... Here Janis Joplin's unmistakeably raspy vocals grabs your soul and takes it for a ride! Her influence over female vocalists would stretch for decades to come!

Crosby, Stills and Nash (s/t)-1969 A band made famous by the Woodstock concert...This album and the follow-up, Deja Vu, with Niel Young are both awesome! With perfect folkish harmonies and social conscious lyrics, it's no wonder why they made it so big! I could sing along with these guys all day! 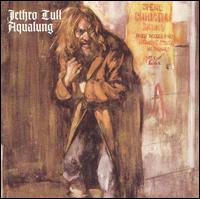 Jethro Tull Aqualung-1970 A flute player in a rock and roll band? Sounds intriguing if you ask me... Rock and roll was still experimenting at this stage. Not only that, singer/flutist Ian Anderson provides great lyrical vision to complement guitarist Martin Barres hard rocking/acoustic abilities!

the Beach Boys Pet Sounds-1966 I'm not a huge fan of the Beach Boy's surf sound, but critics from all over raved about this album. It's easy to see why. Moving away from their typical surfing formula, Brian Wilson with a reluctant band, experimented with new sounds. This inspired bands like the Beatles and the Stones to do the same!

Allman Brothers Band At the Fillmore-1971 As I was writing this, I wasn't planning on mentioning ANY live albums. Yet I LOVE the Allman Brothers! Their first two albums doesn't do justice to their live music. In my opinion, this album would be WAY MUCH higher on this list...that would take a rewrite of this entire blog post. So, I finally gave in to mentioning it here. To me, no one could compare to the Allman Brothers as far as instrumental jams go!

Jefferson Airplane Surrealistic Pillow-1967 Descended from the Haight/Ashbury days in San Francisco, Jefferson Airplane creates an album that defines the time! Blending folk rock with psychedelia, the Airplane brings "White Rabbit" and "Somebody to Love" to the disheveled world... 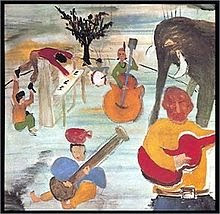 the Band Music from Big Pink-1968 Was considered Bob Dylan's backing band, The Band proves that they're worthy on their own. Yes, with a little help from Dylan himself, The Band blends country, rock, folk, classical, soul and R&B in their own distinctive form! This and their second self titled album are must for any album collector!

Pink Floyd Meddle-1971 Pink Floyd was expanding their horizons even further at this point, setting a tone to what is yet to come. David Gilmour whips his steel guitar in the instrumental "One of These Days" into a frenzy while "Fearless" was a laid back acoustical masterpiece. The 23 minute "Echoes" remained a concert favorite for years to come!

I know I'm missing a few here! I could easily place albums from Buffalo Springfield, the Byrds, Velvet Underground, the Kinks, George Harrison, MC5, Steppenwolf, King Crimson, Genesis and a slew of others here...My God, what a list that would be! This was an era of exploration and experimentation here. Fueled by a culture of strife, confusion and drugs, rock and roll was going to change to world we live in.....

Posted by drewzepmeister at 11:13 PM

Many excellent selections on here. I especially agree with The Doors, Blind Faith and The Who's Next. However, aside from those I believe our lists would differ substantially (that's not a bad thing). I'd toss on Chicago Transit Authority (1969), Sons of Champlin Loosen Up Naturally (1969), Blood Sweat & Tears Child Is Father to the Man (1968), King Crimson's In the Court of the Crimson King (1969), The Guess Who's Canned Wheat (1969), Share the Land (1970) or American Woman (1970) (that's really a tough call as all 3 are great albums!), Three Dog Night Suitable for Framing or possibly It Ain't Easy (1970).

But that era is so rich with fantastic music it's tough to choose!

As always you did a great job on this blog. I know most of these albums not all of them. The ones I do know I really like them. You really know how to surprise me.

I know it took you awhile to get this done. But it is worth seeing it finished. Can't wait to see the next one. The thing is all of your blogs are great. I love to read what you write.

Great choices there Perplexo! I especially like your picks on King Crimson and the Guess Who. Like you said,that era is so rich with fantastic music it's tough to choose!

Thanks for the compliments anonymous! I appreciate them!

Interesting collection, Drew and one sure to polarise opinions, I imagine.

While I know a lot of Zep fans would disagree with you, personally, this Led Zeppelin album is my favourite of them all. You've also hit on my favourite Sabbath album and on the only Beach Boys album I think is worthy. And the Hendrix album is a killer!

I don't know if I'd have chosen Sgt. Peppers over my personal favourite, Revolver, but it is subjective, I know. And I probably would have added Bowie's Hunky Dory and T-Rex's Electric Warrior.

Your Z-My personal favorite album from Zep is Physical Graffiti and that was released in '75.

Revolver is excellent! So was The White Album and Abbey Road. The reason why I choose Sgt. Pepper was its impact on rock and roll per say.

As far as the the Electric Warrior album goes, I had it in mind. There was so much GREAT music during that time frame that it would be impossible for me to pick them all!