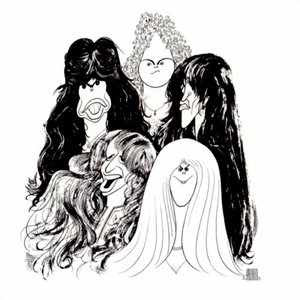 Renting out an abandoned convent on the outskirts of New York City to record the follow-up to the hellacious Rocks may not have been the best idea, but 1977's Draw the Line still managed to be another down-and-dirty Aerosmith release. While not as ass kicking as their previous two, Aerosmith pulls out some great shit here.

The recording process was a long and tedious one. Fueled by excessive living, drugs, in-band fighting and ego clashes Aerosmith still managed to catch fire. Toxic Twins Joe Perry and Steven Tyler often holed themselves up for days getting smacked on heroin, leaving the rhythm section of Brad Whitford, Tom Hamilton and Joey Kramer to fend for themselves. Basically this created the the backbone for the album. Tunes like "Critical Mass" and "The Hands That Feed" are prime examples of that.

Whenever Perry or Tyler ever came around, the results were explosive! The title track, "Draw the Line", has a kick ass slide from Perry and vocal work from Tyler that'll knock the socks off of anybody! "Kings and Queens" brings "The Lord of the Rings" to the surface of my heart. "Milk Cow Blues" is a bluesy anthem that has gotten me on my knees begging for more!

This my not be the best Aerosmith album ever, it is certainly is not the worst...It is more a straight forward rock album than the previous two. Less experimentation here. It could be its just the beginning of the end. From here, Aerosmith would fall deeper into the drug induced abyss, eventually breaking up. Only to have that fire re-ignited....

Posted by drewzepmeister at 8:22 PM

Thanks guys! Appreciate your thoughts! :)