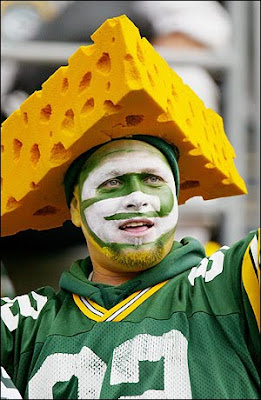 With just one more set of games before the Superbowl and Packer Fever is sweeping the state like wildfire...All I see is a sea of green and gold (along with some blue and orange). The talk is on the streets, on the taverns, in workplaces, in the supermarkets-it's everywhere! The hype is just as contagious if not more since football icon Brett Farve took the boys to Superbowl XXXI in 1997.

Quite honestly, I never expected the Packers to make it this far. I knew that they were good, not this great! After completing a season with a 10-6 record, they plowed over the Philadelphia Eagles and the Atlanta Falcons with a surprising ease.

What a team this is! The bone crunching defense, led by Pro-Bowlers Matthew Clay and Charles Woodson has virtually wrecked havoc on teams everywhere. The once untouchable quarterbacks are now have thrown down on the turf! My hats is off to defensive coordinator Dom Capers for making this happen!

On the offensive side of the ball. Quarterback Aaron Rodgers has thrown with pin point accuracy to various receivers. Never know which will get the ball. Could be Donald Driver, Greg Jennings, James Jones, Donald Lee, or Andrew Quarless. The once defunct running game is now alive thanks the rookie James Starks.

Give it two thumbs up to Mike McCarthy for keeping on injury riddled team alive! 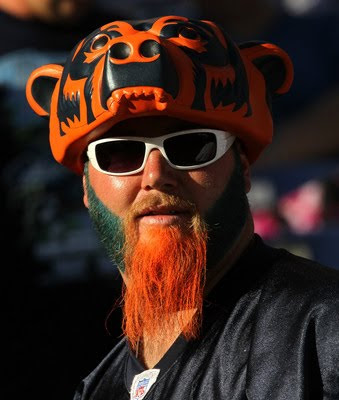 And the blue and orange? Oh yeah, I haven't forgotten about them. The Chicago Bears. Well, they too has exceeded my expectations. Their defense is a force to be recognized with. The modern day Monsters of the Midway led by Brian Urlacher has shut down teams across the league. Quarterback Jay Cutler has shown some amazing plays. Special team Devin Hester is a dare devil on the gridiron type kick off returner. Gotta watch out for him!

And the rivalry? Oh my! The history between these teams go WAY back to earliest days of football. Since 1921, these teams have going at it! Chicago leads the all time series 97-95-6. This the first time they met in the playoffs since 1941.

Making things interesting, my Chicago born girlfriend, some of my friends and co-workers are Bear fans. There is a lot of trash talk, teasing, ribbing and other jocularity going on. I've heard all of this before, but nothing to this level. Admittedly, I'm having fun with this. I've got bets going on. Let's just say, if the Packers lose, I get to wear a Bears jersey for the Super Bowl game. I know...YIKES! I'm praying....

Anyways, this should be a great game! It's history in the making. After all ONE of us going to the Super Bowl! May the best team win!
Posted by drewzepmeister at 9:36 PM

It will be an interesting game no matter who wins. The 2 teams are quite evenly matched this year as well. There have been years in the past when one team or the other was clearly superior to the other. This season I'd say these 2 teams have been quite evenly matched. If Rodgers hadn't been injured for that 1 Bears game, this Sunday's game might have ended up in Green Bay instead of Chicago. I don't think fans of either team, if they're being honest with themselves are expecting their team to embarass the opposition. I think most fans are expecting a rather close game.

Being a Bears and Browns fan I'll be really torn if there's a Green Bay/Pittsburgh Super Bowl. Who does one cheer for if the arch-rivals of his 2 favorite teams are playing against each other? Hopefully that's not a decision I'll have to make.

These are two very good teams. It will be a very close game this Sunday. But as a Bears fan yes I will be going for the Bears. They both have real good defense. But one thing is the Packers have been practicing inside and the Bears have been practicing outside. So that may end up being a factor for the game too! Watching the news all the player that are interviewed say they know how good the other team is and is not downing either team.

The thing is I would really like to see the Bears and the Jets in the Superbowl.

Now for the bet we have going I just think you look real good in Blue and Orange Babe!

Well guys, I'm thinking this would a highly defensive low scoring game. It just might come down to that one big play...

BTW anonymous, I'm thinking more in the lines of green and gold...:P

GO PACKERS! Meanwhile, we in the Pacific Northwest have nothing but Seahawk Fallout, during which the team's offensive coordinator gets fired just because his guys could only play 1 quarter of football against the Bears.... How the heck did Seattle get to the playoffs anyway? How did they win their division? They played 1 great game all year, against New Orleans. The rest of the time they looked sloppy.
As long as the Steelers don't win the big one again I'll be happy....