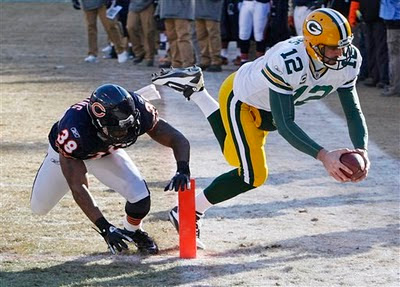 The Green Bay Packers beat the Chicago Bears 21-14 and won the right to go to the Super Bowl this afternoon.

Here are my thoughts of the game....

Quite honestly, I didn't think either team would make it this far...
The Packers played an excellent first half!
Bears lost QB Jay Cutler in the 3rd quarter due to knee injury.
Their second string QB, Todd Collins was ineffective.
Admittedly, I was starting to get worried when their third string QB, Caleb Hanie was playing rather well.
Both defenses played great! Yet, the Packers prevailed in the end!

The winner of the Pittsburgh/New York Jets play against the Packers in Super Bowl XXXXV on February 6
Posted by drewzepmeister at 6:47 PM