I don't listen to the radio as often as I used to. One of the big reasons for that is many radio stations tend to keep playing the same song over and over again. It gets old and mundane after awhile when the DJ announces an artist and you know what going to be played. I would like to hear radio stations to be more unpredictable. Play something old, something new, something obscure, something heavy, something mellow, dig deep into the catalogs and mix it up! More of a variety is a good thing... 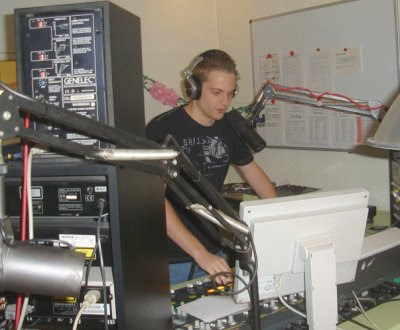 Jimi Hendrix Experience-Purple Haze
Pink Floyd-Another Brick in the Wall (part 2)
Led Zeppelin-Stairway to Heaven
Santana-Black Magic Woman
Queen-Bohemian Rhapsody
Yes-Roundabout/Owner of a Lonely Heart
Kiss-Rock and Roll all Nite
Guns n' Roses-Sweet Child O' Mine
Nirvana-Smells Like Teen Spirit
Black Sabbath-Iron Man
I realize that these songs are classic, but instead of Another Brick in the Wall could they play something off of Animals instead? How about the full length version of Close to the Edge from Yes? I'd totally rock out to Santana's Samba Pa Ti. Zeppelin, Hendrix and Sabbath have a full catalog of music to choose from. Time to dig deep into their music-great stuff in there!

So what tunes are you getting sick off? What would you like hear instead?
Posted by drewzepmeister at 8:56 PM

if I knew that classic rock radio would have played all the Boston,Skynyrd,Paranoid stuff my record collection would be 3 times less than it is today. I love Free Bird/Sweet Home Alabama like the next guy but hearing it everyday for the past 35 years gets a bit mind numbing. And I never owned Dark Side Of The Moon of the fact that it is overplayed with Money or Time. With radio burnout of Stairway To Heaven I change the channel a lot but when I play the CD then it sounds not like burnout.

I Could go on and on but we have so much music out there and so many outlets but seems like the playlist keep getting down to the same 100 per day.

I agree with you so much. I went up to Oshkosh Wednesday and I was listening to the radio. This one station played the same song three times with in four hours. The second time it came on I was so upset. They could have picked something else. It's not like there is not any other song out there to play. To top it off it was not even requested to play that song. I could see if people requested the song to be played that is totally different.

I use to help with Karaoke and I use to hear the same songs every weekend. No one would try to sing anything new. It was the same old songs over and over. This is why I really know what you are talking about. I do not help with Karaoke anymore and I DO NOT miss it at all. With Karaoke you have to sit there and listen to them sing these songs way off key to top it all off.

Right there with ya, Drew -- but U know the accountants & bean-counters will tell ya that a more unpredictable radio format WON'T PAY THE BILLS. People don't WANT 2 B challenged or surprised, it's just background music anyway, blahblahblah. It's all BS.
What am I sick of? Don't get me started. I did a whole blog post/list of overplayed stuff a year or so ago. How 'bout "Smoke on the Water"? Got sick of that 35 years ago. "Slow Ride"? "All Right Now"?
Some stuff survives this overplay treatment -- I still think "Stairway to Heaven" & "Roundabout" & "Us and Them" sound as great as they did in '71-'73.
More variety would B GREAT. Just don't hold your breath 4 it. When 1 of us gets rich we otta BUY a radio station & show all the other idiots how it's done....

Crabb-So true about the play lists! With the ever growing music ya think radio stations would play more of a variety? Seems like they are playing more of the same thing.

Anonymous-You must have a strong will to put with all that karaoke every weekend! I would be dreading it...

...But you also asked what we'd like 2 hear MORE of: I'll tell ya, I would LOVE 2 hear more of the stuff that radio played back when I was a young teen, 1971/72/73 -- & I don't just mean the hits. Radio seemed a lot more open then, a lot more willing 2 take risks.
Ever heard any of these?: Billy Lee Riley's "I Got a Thing About You Baby," Chris Hodge's "We're On Our Way," Johnathan King's "A Tall Order for a Short Guy," Sutherland Brothers & Quiver's "You've Got Me Anyway," Austin Roberts' "One Word," Casey Kelly's "Poor Boy," Kracker's "Because of You"... All great songs that got lotsa radio play where I was living back then, all now forgotten. I've found a FEW of these after years of looking, but you can't even find some of 'em 4 sale on the Net. ...& of course I'd love 2 hear all my favorite obscure songs because I think they're great & other people would like them, even if they're done by folks nobody's ever heard of....
I would LOVE 2 B surprised by the radio. We have an oldies station here that does sometimes surprise me, not always in a good way -- 1st time I've heard Frank Sinatra & Perry Como on the radio since about 1970 -- but Ghod knows who supports the station, they seem to run NO commercials....
I read somewhere that Stephen King 1nce bought a radio station in Maine & played only what HE wanted 2 hear, at least 4 awhile. Wonder how THAT turned out....

I agree that is why I have been listening to the Drive's Deep Track internet only connection. WDRV.com
Even thye do tend to repeat but far less often and there are no commercials!

Dan-Thanks! I'm going to have to check out that station.

I think radio playlists are both demographically and regionally based. In Australia, while some of the songs you mentioned would certainly be on my list, others include Baker Street by Gerry Rafferty, Down Under by Men At Work, Jailbreak by AC/DC and a whole bunch of others I can't recall right now. Mine used to work in FM radio and there are certain songs that make her cringe hard every time she hears them because of overplay.

Segue: while on this subject, a guitar shop here has a sign up in their amp room that says anyone playing Stairway To Heaven, Iron Man, Enter Sandman and a few others will be asked to leave. True story!

YourZenMine- I know how you feel about how you cringe when you her the same song over and over.I felt the same way when I was doing Karaoke. Especially when the people would be singing the song off key or singing them drunk and can't sing the songs at all. That is one of the reasons I quit doing karaoke. But my main reason was for my boyfriend. I will tell you one thing I do not miss it at all. I am enjoying being with my boyfriend so much right now.

YourZ-That reminds me of the movie "Wayne's World" -too funny!