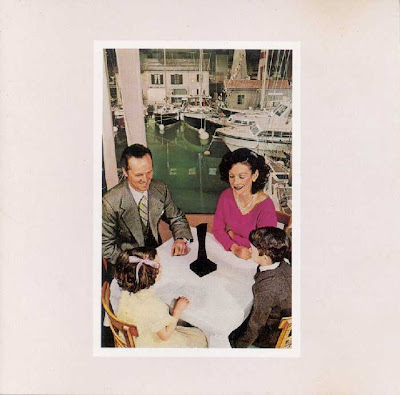 It was August 4, 1975 while vacationing on the Greek island of Rhodes, a car driven by Maureen Plant flew over a precipice and slammed into a tree. It was a serious accident. Singer Robert Plant suffered a broken elbow and a shattered ankle. Doctors said that he may never be able to walk again. His wife's injuries were more serious. She had suffered a fractured skull and a broken pelvis.

This was a turning point for Led Zeppelin. With the band was riding high with six classic albums and filled stadiums, the band's luck had come to a screeching halt. With Plant unable to walk, any plans to tour were scrapped.

The tide had turned. Guitarist Jimmy Page wasn't giving up on Zeppelin's momentum. Unable to stay in England because the band was in tax exile, the band reconvened in the warm climate of Los Angeles were they rehearsed new material for the upcoming Presence. In October the band had moved to Munich, Germany to record the new album.

Recording the new album was nothing sort of a miracle. Robert Plant. still in a leg cast, recorded his vocals in a wheelchair. That didn't hamper the progress very much. The band shined under pressure. The highlight of the album was the phenomenal ten minute epic masterpiece "Achilles Last Stand". Plant's voice here just sails above the din, bringing a lyrical landscape of mythical proportions. Jimmy Page builds a guitar orchestra that is stacked up layers and layers of sound. Feels like one is hearing multiple guitar players instead of one. John Bonham-holy cow! His frantic drum rolls-rounding off his tom-toms, crashing into the cymbals is an air drummer's wet dream! John Paul Jones' thunder bass supplied more than ample rhythm.

The rest of the album may not fare as well as "Achilles", yet they are worthy of note. "Nobody's Fault But Mine" takes pages from an Blind Willie Johnson tune, is complete with a killer harmonica solo and cascading riffs. "For Your Life" takes a look at the somber side of cocaine overdose in Los Angeles. "Royal Orleans" pokes fun at John Paul Jones' nocturnal adventures in New Orleans two years earlier-something about "kissing whiskers". The last track of the album, "Tea for One", Plant pours out for the loneliness of being away from his wife and children.

All of this album was done in a mere three weeks!

This may not be the best Zeppelin album done, but it is a hell a lot better than many out there. My biggest complaint would be the lack of John Paul Jones keyboards here. In the hurried frame of mind, I guess that would be understandable. The next studio album would change that fact...

I'd highly recommend this album to any Zeppelin fan. Then again, every Zeppelin album is great to me....

Posted by drewzepmeister at 11:26 PM

Drew: Is it me & my tiny laptop, or is there something wrong with your blog? It loads & then it "whites out." When I scroll down 2 read this review, I can actually start reading it & then it goes all white & I can't see a thing. Have you got design issues going on, or is it me & my bad eyes? Please advise....

Hmmmm...that's strange, Tad. I did change the look on my blog and got a new template. It shows up fine on my computer. As well as everything else...

Is anybody else having this problem? Please let me know...