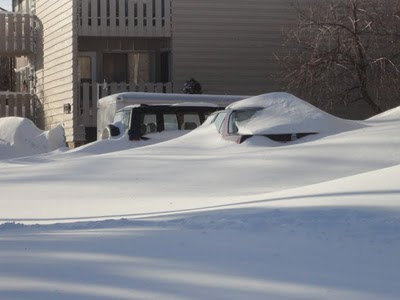 For those whom called me and e-mailed me with their concerns, thank you, I'm fine. My city however, is a mess.

As the storm clouds drifted off the east early this afternoon, I was finally able to survey the "damage". My parking lot was covered knee deep in snow and cars were buried. It looked impassible.

Thanks to the snow plows, I was finally able to get my car out and take a drive around the area. Many people were out there armed with snow blowers and shovels digging out. There were banks upon banks of snow mounds looking like mountains. Yet, I still saw abandoned cars plowed in and buried and many side streets still unplowed. With all the snow we had, it is going to take awhile to clear all of this mess.

By all news accounts, Racine and Kenosha counties got hit the hardest. We got nailed with 23.5 inches of snow. Wind gusts up to 64 mph were reported. Interstate 94 was shut down from Milwaukee to the Illinois border. I heard of numerous reports of police cars, tow trucks and rescue vehicles stuck and stranded, sometimes for up to 10 hours. The National Guard were called in to rescue stranded motorists. The entire southeast Wisconsin was shut down and became literally a ghost town. A state of an emergency was declared.

All in all, I'm fine and relieved that this is over. Thankful for a warm home and safe from the outside elements. This is the worst blizzard I've seen since 1977/1978, when I was a kid. I pray that I don't see another like this anytime soon...
Posted by drewzepmeister at 6:29 PM

glad to see ya made it through. I think we ended up getting 16 inches of the white crap and drifts were up to my car's hood. However it was snow only so the roads were easily plowed and did make it to work okay although the offramps were slick and the four way stop was black ice galore on the way home.

The ones that did go to work last night didn't fare so well. One guy took about three hours to get home and still got stuck five miles from his place.

I've been thru worse blizzards the big 19 inch snowfall of 73 still the worst snowfall and the 2007 icestorm hell that knocked power out of here for three nights was the worst winter storm and if I don't see another blizzard in my lifetime it wouldn't break my heart.

Glad that you made it through too, my friend!