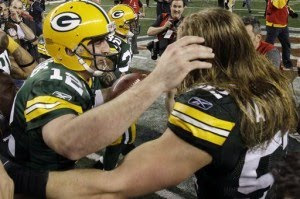 My girlfriend's son came down from Shawano to watch the game with us. Had sub sandwiches and snacks galore during the game.

The pre-game show was the usual crap.

Half time was a joke. The Black Eyed Peas looked like a Christmas tree gone wild. The only bright spot was the special appearance of Slash.

Injuries got the better of the Pack. Charles Woodsen, Donald Driver and Sam Sheilds got sent the locker room to tend their injuries. It looked as if the Steelers were going to make a comeback. Things were getting scary. Yet the Packers prevailed in the forth quarter, stopping a potential winning Steeler drive in the end.

Aaron Rodger won the MVP award for his game efforts.

All in all, it was a GREAT season for the Packers. I never expected them to go all this way, but I'm GLAD that they did!

Posted by drewzepmeister at 9:46 PM

Yes that was a real good game. I am glad you are happy about the game. You are right the Packers had them at the beginning of the game. I have to say that Rodgers never gave up for one second. Also the Defense never gave up either. I just liked it when they sacked the Steelers QB. I am also glad the Trophy stayed with the NFC.

Anonymous-Yes it was a great game!