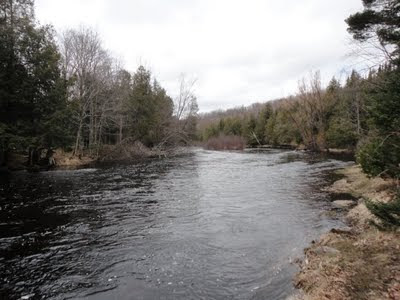 Thursday night, my computer went on a fritz...Firefox crashed and I was barely running off on Internet Explorer. That put the final decision on heading Up North for Easter weekend, besides I figured I really needed to get away from the insanity that been going on lately. Glad that I did!

Friday morning, after I dropped the computer off, I headed off for the boondocks... Breaking away from gray metropolitan of Milwaukee into budding brown and green of the countryside, I felt my heart getting a little lighter. As I was traveling northbound, I could still see patches of snow hidden from the glow of sunlight. Winter was slowly losing her battle against Spring.

The battle between seasons became more evident by the time we reached Appleton. The Wolf River had overflowed its banks, kissing the roadways. I had recalled news stories about major snow storms hitting the area just a few days before. Not much snow now, just water and ice. The lakes were starting to thaw around the edges like ice cubes bobbing in water.

The wildlife seemed to rejoice in the upcoming spring. I saw a small heard of deer just outside the Menominee Indian Reservation. A turkey was trying to decide his fate with traffic just further down the road. By time I left my folks' place Sunday, I've already seen a black squirrel, downy woodpeckers, nuthatches, goldfinches and juncos in the birdfeeders. Vultures were gracefully on the wing, soaring high on the thermals. Bufflehead ducks, swans and loons were taking over any open water.
Yes, my girlfriend and I enjoyed the peaceful, easy feeling of the countryside. Before that delicious Easter dinner, we visited the Woodland Trail Winery in Lakewood. Had our partake in wine samples before deciding on a bottle of Northern Ice. Time was well spent visiting our families and friends, enjoying feasts and laughter.

As fast as holidays come, they go. As much as we wanted to stay and relax a little bit more, reality beckoned us to come home. A nasty year long court case with a surprising verdict, work, bills to pay and a computer to pick up.... It won't be long before we head up there again..... 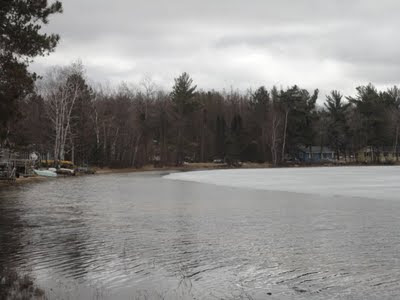 Posted by drewzepmeister at 10:13 PM

Thhanks for a great read