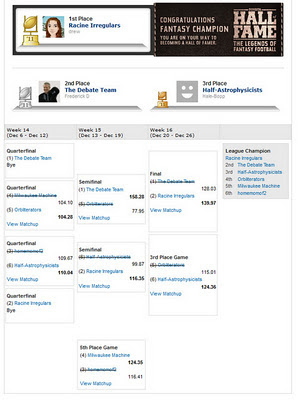 It came down to match between the hippies and the Republicans. "The hippies came and occupied...." That was the championship game. The final game of the Irregular League Fantasy Football season. The match was between my team, the Racine Irregulars and Fred's (from Real Debate Wisconsin) Debate Team. Fred's team (who won last season) had been strong all season long, while mine struggled at first before finishing up strong.

Surprising was this season. In the four seasons I've doing this, I never done better than 5th place. In fact, in 2009, I came in dead LAST. That year, I was in over my head with personal issues to even care.

This year I got lucky. I got some good players on my team. The Packer's QB Aaron Rodgers and the Patriot's TE Rob Gronkowski were my most reliable players. San Francisco's RB Frank Gore, Philadelphia's WR Jeremy Maclin and New Orleans' Marques Colston helped out greatly. Picking up Oakland's RB, Micheal Bush proved beneficial for the team. Rounding out my team were, New York Giant's WR Hakeem Hicks, Dallas' kicker Dan Bailey and the defense of Cincinnati. My backups basically were New England's RB BenJarvus Green-Ellis and Dallas' WR Laurent Robinson.

All in all it was a great season. I have to thank my fellow Irregular and commissioner RW Wacko Stu for starting this league for all of us Irregulars (and non Irregulars) to enjoy. I had a blast!
Posted by drewzepmeister at 7:07 PM