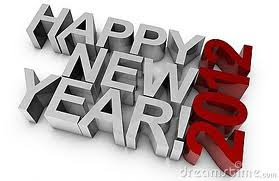 It's the eve of the new year and nothing fancy is set up to celebrate tonight. It just going to be my girlfriend and I tonight bringing in the new year alone. We've got snacks, drinks, movies and music to ring in the new year. It doesn't sound like much, but after years of going out drinking at bars (when I was younger) hanging in the crowds, it's nice to to spend that evening alone with woman I love.

2011 was better year than the past. While 2009 was a roller coaster of events, 2010 saw myself rising out of the ashes to find myself again. This year, not only I found myself, I found life to be truly enjoyable, especially in the small things. I have much to thank my girlfriend for that. Let's see how this year evolved...

After Christmas, last year my girlfriend and I settled into our routine of things. On Groundhog's Day, a blizzard of historic proportions slammed Southeast Wisconsin, dumping more than two feet of snow in the area, burying cars and shutting down I-94 from Milwaukee to Chicago. The National Guard was called in to help stranded motorists. The area was declared a civil emergency. Not since the winter of '77/'78 I've seen snow like this, nor I'd want to ever again.

Later that month, my battleship of a car, the '91 Chevy Caprice Classic I had was finally starting to hit the dust. After getting a $9oo estimate to replace the manifold it was time.... Found myself a 2007 Chevy HHR (a moving snowbank, my girlfriend calls it) for a descent price. However, dealing with the bank proved to be a nightmare.

It was springtime of peaceful bliss, except in April when my loveable golden retriever, Harley, had gotten very sick. To this day, it was unclear to what she was suffering from, but the thought of losing my ten year companion was unbearable for me.

Three graduations came in June. My son, Austin barely graduated from middle school to high school. Though I am proud to see my son growing up, but a little effort is needed out him to get better grades. My "daughter" Angel and my girlfriend's daughter, Kimmy both graduated from high school TOGETHER! It was a very heartwarming moment to see them both in their robes with their caps on to receive their diploma. Believe it or not. I cried at the ceremony. Both are now attending college here in Racine.

Life got busier by summer. My girlfriend and I went to Summerfest and saw Styx there. Despite having to deal with a large crowd, Styx pulled off an excellent show playing their classic hits. Streamers fell from the sky as HIV inflicted bassist John Panozzo joined the band for "Come Sail Away"

Mid July saw the conviction of my son's former 16 year old best friend, Christopher for the rape of my then two year old "granddaughter", ending a long and dark chapter in my life. He was sentenced to ten years in prison plus 15 more of extended supervision. It might not seem long enough, considering the lifetime of memories my 'granddaughter' will face. The only thing remains to why the sick little fucker pulled this stunt in the first place.

In August my girlfriend got a job working at a local grocery market as a cashier. It is certainly nice to know that my girlfriend is stepping up to plate to help out with the bills, especially with a car mortgage on my tail...

We missed a Doobie Brothers concert in September to witness the birth of my girlfriend's first grandchild in Shawano. Seeing the 7lb 4oz little girl in the arms of my girlfriend with a beaming smile was worth the trip. A concert will always come around, but moments like these I got to take when they come.

Cheri (my girlfriend) and I took numerous trips Up North over the past year. Easter, Christmas, her niece's wedding or just to visit. Going up there on Cheri's birthday was especially nice; we had a cabin to ourselves.

All in all, it was a great year with a few bumps on the road-nothing major. I'm hoping for an even better year to come in 2012. So my friends, cheers to the new year....ENJOY!
Posted by drewzepmeister at 11:28 AM