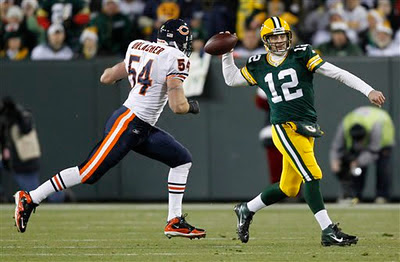 Just got home minutes prior to the game from being Up North with my family. Anyways, the Green Bay Packers beat their NFC rivals, the Chicago Bears 35-21 at Lambeau Field tonight.

The Packers struck first, scoring with a 2 yard pass from Aaron Rodgers to Jermicheal Finley on their first drive.

After that, much of the first half was dominated by the Bears' running game. As good as it was, they only gained three points off a field goal.

The second half of the game, the Pack took over. Their defense tightened up with two interceptions and an exploding offense. The ending result was five touchdown passes from Aaron Rodgers, two each to receivers James Jones and Jordy Nielson.

The Bears have lost five games in the row since losing their star QB Jay Cutler with a broken thumb. They have no chance to making the playoffs.

The Packers are 14-1 and have chinched home field advantage throughout the playoffs.

More on the game here.
Posted by drewzepmeister at 11:48 PM