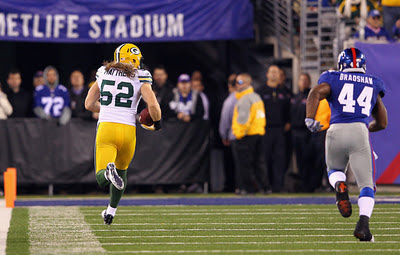 The Green Bay Packers beat the New York Giants 38-35 in this nail biter of a game at the Giants Stadium in East Rutherford, New Jersey.

As I predicted, the Packers had their greatest battle of the season against the exceptional Giants.

Aaron Rodgers threw 28 of 46 for 369 yards and 4 touchdowns. Yet, he was sacked 3 times and threw one interception. (His fifth, all season).

Linebacker Clay Matthews also returned an interception 38 yards for a score in the second quarter.

The game came down to the wire when Packer kicker Mason Crosby kicked a 31 yard field goal at the last second to win the game.

The Packers are now 12-0 and cliched a spot in the playoffs.

More on the game here.
Posted by drewzepmeister at 9:11 PM