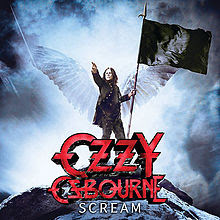 Ozzy Osbourne Scream-2010 Like oil and water, some things don't mix. Ozzy Osbourne's latest album, Scream is the perfect example of that. Osbourne's guitarist Zakk Wylde had left the band to work full time with the Black Label Society, leaving the Prince of Darkness a void to fill. The answer was a new guitarist and a new direction-techno. Kudos to Osbourne for taking a risk, but this ends up sounding like a bad version of Nine Inch Nails with the screaming.

Kiss Revenge-1992 Was critically acclaimed to be one of the best post makeup Kiss albums. While some of the tracks like "Domino" may sound sonically refreshed, others sound rehashed and recycled from their early days. Makes a listener miss the original guitarist and drummer Ace Frehley and Peter Criss. What's even worse, I haven't listened to Carnival of Souls nor Hot in the Shade yet. Not sure I even want to...

Lynyrd Skynyrd God & Guns-2009 Ok, it's a hard rockin' rebel Southern redneck album with an attitude to match. So, what's not to like here? Something is missing here. What's missing here, unfortunately, is compassion and heart, the secret ingredients that the original late singer Ronnie Vant Zant represented in the legendary tunes like "Freebird" and "Sweet Home Alabama". Sure, Ronnie younger brother Johnny tries to carry the torch, but with the numerous lineup changes and guitarist Gary Rossington being the sole remaining original member, maybe it's time to hang up the Skynyrd name and try something else.

Bruce Springsteen Diesel & Dust-2005 Zzzzzzzz.....Upon first listen, this album put me to sleep. It's somber, it's mellow and nothing I'd expected to hear from the Boss. Maybe, with repeated replays it'll grow on to me. With albums like Born to Run, Born in the USA and Working on a Dream high on my playlist, it'll take awhile.