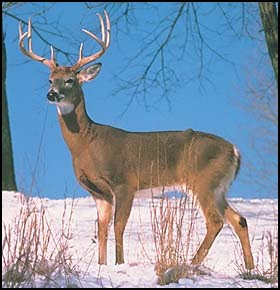 Twice this week, I almost hit a deer on the way to work in the morning! I hate it when that happens. Crashing into a deer can cause some serious damage to a car. My folks hit a couple a deer a couple of years ago and it did over a $1ooo worth of damage. Yikes.

Now is the time of year the were the deer is on the move. It's mating season. The bucks would running around in search of a mate. Although deer are active all times of the day, they can be mostly be seen during the dawn and dusk hours. That's way you have to be extra careful when you drive.

Here in Wisconsin, we have a hunting season that draws thousands of hunters to the northern parts of the state. The idea of a hunting season, seeing that there really no natural predators, is to trim the herd to a more manageable level. The wolf population is endangered in the state (yet, they are making a comeback) and the bear, well, they can't do it all. Without the hunting the deer population would increase and cause problems. One the problems would be starvation in the winter. Too many deer and not enough food. The other would be car accidents.

Sorry, I would want this to happen to my car!
Posted by drewzepmeister at 8:04 PM

I don't see much deer in my hometown -- increasing population in the suburb/neighborhood brings about construction so the deer are slowly leaving.

In houses around Lake Travis (near Austin, TX) a few years back, deer was such a problem that they were literally picking them up and putting them in zones where hunting was allowed to try to decrease the population! Haha

I hit a deer once, luckily I had slowed considerably before I hit it as I'd just missed a deer a few minutes before I hit one. It did a real number on my hood but other than that the damage was minimal. We found a replacement hood (in the right color too!) at a nearby scrap-yard for under $100 and a friend of my Dad's installed the new hood and "re-aligned" the headlights as best he could. It wasn't a pleasant experience. But the deer population in the Adirondack Mountains (where I grew up) is similarly high. My mom's dad was a hunter and used to go hunting with my Dad when I was really young (and before I was born for that matter). After my grandfather died, my dad kind of lost interest and stopped hunting. He said it just wasn't the same without his father-in-law.

One of my brothers likes to hunt in bow, rifle, and black-powder hunting seasons in Northern Virginia. But, from what I can tell he was the only one of us (my father's sons) who caught the "hunting bug" from our grandfather.

Classic-I'm seeing more deer around my area (SE Wisconsin where there is more cities) than the northern parts of state. Which is weird. I think the deer know that they are not being hunted as much around here.