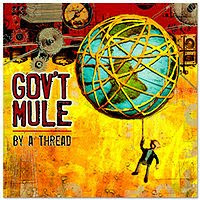 One of the Christmas presents that I got for myself this year was Gov't Mule's By a Thread CD. The hardest working man in rock and roll has done it again! Allman Brothers Band guitarist Warren Haynes and his band put out another put another album of great materiel. This album is awesome! I have only listened to this album twice and it has me blown completely away.

I haven't really gotten a chance to really pick apart this album yet, but tunes like Steppin' Lightly, Broke Down on the Brazos, and Any Open Window light me up with some killer guitar solos! Bluesy numbers like Railroad Boy and Outside Woman Blues move me. There is not track on this album that that I don't like.

Posted by drewzepmeister at 8:22 PM

Awesome Song you posted Drew .... The guitar riffs and the vocals were both really appealing to me.... I'm downloading other of their tracks too now.... Nice post !

Cool! I love the Allman Brothers...you are taking me back in time :)
I love the cover to the CD too. I'm going to check it out!
Happy New Year, Drew!

Thanks guys! Be sure to check out Gov't Mule as much you possibly can! Some their stuff really blows me away!

thanks for the kind words about my review. Love this band and this CD.

Hello everyone I was just dropping in to say hello and introduce myself! Im a computer nerd that came upon this forum and hope to become an active member soon! So if you happen to have and computer questions feel free to ask. Otherwise see you all on the boards.