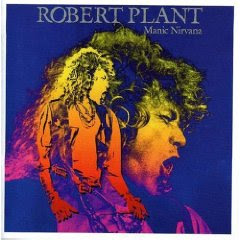 Well, Every week I'm going to try to post up a record review. Something random from my album collection and see how that goes. This week's pleasure goes to Robert Plant's fifth solo album Manic Nirvana. Everybody that knows me knows that I'm a die hard Zeppelin freak. I live, breathe, and eat Zeppelin. So, it's fitting that I get all the post Zep stuff.

This album here, in my opinion, one of the better solo releases. It's more hard rocking with a Zeppelin "feel" to it. Remember this, prior to his 1988's release of Now and Zen Robert Plant has been trying to get away from the Zeppelin legacy and make it on his own as a true musician in his own right. He has made some good results-especially NOW. More on that in a later blog.

The album starts off with the rousing Hurting Kind (I've Got My Eyes on You) and never lets up. Tunes like Nirvana completely rock! "Liar's Dance" reminds me of "Going to California." "Your Mama Said You Cried in Your Sleep Last Night" has lyrics taken from "Black Dog."
Anniversary has a killer guitar solo! To me, it's wonder why this album turned up in the cut out bins years later.

I saw Robert Plant at Alpine Valley for the second time during this tour. Not only did he play his solo stuff, he pulled out six Zeppelin tunes! What a show! Yes, I do have this concert on tape!

This video here is a showcase of my favorite song off the album, "Tie Dye On the Highway" from Knebworth 1990. Yes, I got that show bootlegged well.

Posted by drewzepmeister at 7:21 PM

I have heard of this solo album but never heard any song from it, but your appreciation for it and the song Tye die on the highway make me think again ! I'm really interested in this album now ! Thanks for your review Drew ...

Speaking of Zep related stuff, do you have the 2 albums by The Firm? In the end I don't think the combo of Paul Rodgers & Jimmy Page worked. Which is unfortunate because I quite enjoy Rodgers vocals and while I'm not gaga over Page, I do appreciate his talents and the influence he's had on many many many other guitarists.

Arjit-Glad that you're interested in this album! Most of Robert Plant's solo albums are very good. Just remember this as you're listening to him; Plant is simply expanding his horizons as musician by not dwelling on or recreating the Zeppelin legacy.

Perplexo-Yes, I have both of The Firm albums as well a bootlegged concert from 1985. Although I like The Firm, I admit I was expecting more from a Bad Company/Led Zeppelin combo. Especially from Page.

Drew: I could take or leave mosta Plant's solo work & never thot I cared much -- but I read a coupla interviews Bob did around the time of this album & NOW AND ZEN (both w/ Charles M. Young & published in the old MUSICIAN magazine), & the guy is HILARIOUS! Funny & wise & relaxed & constantly joking, he takes nothing seriously, & I gained a lotta respect 4 him. He otta do a comedy album!
I'm not sure where U'd find the interviews now, but if U can score some back-issues somewhere I'm sure that, as a big Zep fan, U'd love em.... -- TAD.