The Lastest on Becker 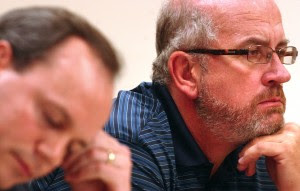 Last January, our then mayor of my wonderful city was arrested on charges of attempted sexual assault on a minor and possession of child pornography. Since then has resigned as mayor, gotten divorced by his wife, sought "treatment" in Pennsylvania, and worked on houses in Racine. Whatever.... To me, mostly what has he done is brought disgrace to this city.

I remember meeting the the mayor before this all began. (I'm still washing my hands) I was horrified and shocked how delusional he was! At that point the crime rate in my city was sky high and all he was worried about getting art projects developed. I asked him if he ever walked in the ghetto areas of my town at night, (which I have) all he had to say that he rode shotgun in a police car during the day! Yeah right, find crime that way.... It's like finding cockroaches in the light.

After hearing about this sex scandal, it was a relief to to city to be rid of him! I feel sorry for his daughters, who are about the same age as the alleged accused. The transcriptions he wrote to "her" makes me what to puke. I can not fathom to what he has done to his family.

More of the stories are here and here. Please dig deep to understand all of this.
Posted by drewzepmeister at 10:21 PM

When I grew up in the Adirondack region of NY state. I was a big fan of our state assemblyman, Chris Ortloff. He was a former news anchor for the area's NBC affiliate and won in a landslide victory in 1986. He remained in office for over 20 years. I met him once at a debate in 1992. He was nothing but generous.

After he retired from the state assembly he was appointed to the state parole board... and then:

"former state Assemblyman Chris Ortloff. He represented the Adirondack region for 20 years as a state Assembly before Gov. George Pataki appointed him to the parole board, of all places, in 2006. While he was deciding the fate of inmates hoping for parole, Ortloff was using the Internet to set up sexual encounters with pre-teen girls. Last year, he was caught in a police sting at an Albany-area hotel where officials found condoms, sex toys and a camera. Ortloff was awaiting what he thought was going to be a meeting with 12-year-old girl and her 11-year-old sister who were to be dropped off by a parent. He has pleaded guilty to a charge of online enticement of minors, but the state Constitution still guarantees Ortloff will receive a pension — in his case, more than $50,000 annually."

It turned my stomach and pissed me off. It also really saddened me. I felt a deep betrayal of the public trust when I read about this. He doesn't deserve $50,000/annually. He deserves to rot in jail and to become some bad man's boyfriend.

Perplexio, It's a damn shame that some public officials end up this way. What saddens and sickens me was not only the internet chats, Is what his teenage daughters must think of him.