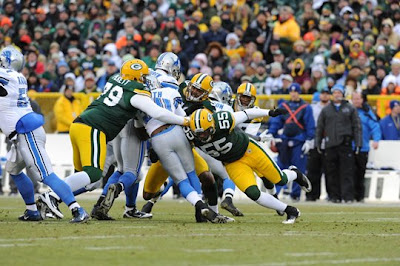 The Green Bay Packer beat the Detroit Lions 45-41 in the last regular season game this afternoon at Lambeau Field.

With nothing at stake in this game, the Packers rested up some key players like all star QB Aaron Rodgers, DB Matthew Clay, S Charles Woodsen and WR Greg Jennings.

It appeared early in the game that the Lions were going to take advantage of the Packers' second string by taking the lead.

Enter the Packers' backup QB, Matt Flynn who set franchise records with with 480 yards passing and six touchdowns., proving himself a very reliable back up to Rodgers.

It became a shoot out of a game, both teams exchanging leads throughout the game.

The Lions' QB Matthew Stafford, who threw for 520 yards with five touchdowns and two interceptions was exceptional.

The Packers have ended their regular season with a 15-1 record. The have a first round playoff bye.

More on the game here.
Posted by drewzepmeister at 8:24 PM

was there!!! what a game! one for the record books for sure.