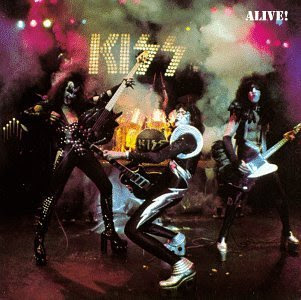 I know some people are gonna crucify me for the album review. I have a confession to make. "I, drewzepmeister, am a KISS fan. I usually listen to a exquisite diet of fine rock and foll. Refined and delicious.The five star course bands like Led Zeppelin and Rush. Once in a while I like sit down and have a Happy Meal. KISS is that Happy Meal.

I know you're thinking "Huh?' Allow me to explain. I think of founding members bassist Gene Simmons and rhythm guitarist/vocalist Paul Stanley as the cheeseburger. Gene simply just prods along displaying his power on the bass. He may not be any Chris Squire nor Geddy Lee, but he gets his job done. His bass lines on tunes like"She" and "100,000 Years" were rather impressive" As for Paul Stanley, he knows how to work a crowd into a frenzied mob-belting away tunes like "Strutter" and "C'mon and Love Me" created perfectly for hormone driven 14 year old adolescent boys.

You know when you get your fries hot and fresh from the kitchen? Quite tasty huh? Guitarist Ace Frehley and drummer Peter Criss are the fries. You can't get enough of them. I think these guys are the band's most talented players. Ace was my guitar hero till Jimmy Page came along. Blazing guitars solos everywhere! Peter Criss shines on his skin solo in "100,000 Years" and does excellent work on "Parasite".

The lyrics....ummm,well...Can't say say they write like Bob Dylan or Bruce Springsteen by a long shot. In fact, some of them are quite laughable! Take "Deuce" for example-

Come on now! These are real heavy lyrics here! NOT! Songwriting isn't one of their stronger points.
This album was the breakthrough that both Kiss and Casablanca Records sorely needed. Casablanca was on the verge of bankruptcy when the album was release. Culled from four different shows across the Midwest in 1975, this album went platinum. "Rock and Roll all Nite" was issued as a single. Kiss went to headlining areas all over the world!

Then there is a rumor that this live album has heavily doctored. This meaning that the live recordings were taken into the the studio and overdubbed. Depending on which Kiss member you talk to, each gives a different story on this. Kinda tarnishes the feeling. Nevertheless, I can still ROCK to this album!

The toy in the Happy Meal? Oh yeah... We all like shiny things! That would be the show itself. Kiss are the masters of showmanship! The costumes and the makeup! Flame throwing, bloodspitting bass players, rocket firing guitars, the pyrotechnics and confetti. What the hell, it's a rock and roll circus! A cheap thrill! What more a 13 year kid can ask for?

As for me, I still enjoy slapping my disc in my car cranking it to ear splitting levels while sitting at a traffic signal-drowning out the guy playing rap next to me....

Posted by drewzepmeister at 10:16 PM

When i was six years old, my mothers sister "Found God" and decided to get rid of a lot of those sinful rock and roll records in her collection. The family wasn't exactly made of money, so for my sixth birthday she gave me a stack of LPs that she no longer wanted. Among a few AC/DC, ZZ Top, Skynyrd, Zep, etc were the first several Kiss records including 'Alive.' And being the record collector nerd that i am- I still own them all! (Unfortunately, the stickers that came in 'Rock and roll over' album promptly went all over my bicycle. It still pains me to this day to think about that-- If only i had known.)

That would have been summer of 1978, so at the time all that music was still pretty current. I have been a fan ever since. I was even Gene Simmons for Halloween that year. About ten years later i got my first bass, and have been playing ever since. I have Gene to thank for that. He was always my favorite.

Yeah- It's a kick ass record.
There's no shame in being a fan of classic Kiss.
None at all.
In fact, it's been a while, i think a re listen of this one might be in order......

As always you have a way with your writting. This is great. I do like the group but not one of my favorites. I would rather listen to the Beatles, Skynard, ZZ Top, Bad Company.
My son he loves KISS. He has all of there albums.

Jeff-Guess I shouldn't tell you that I STILL have my Rock and Roll Over stickers. It's safely tucked inside the album cover...Kiss is what started it all for me-my obsession for rock and roll. Thanks Jeff, for reminding me that. Glad that we eye to eye on this.

Anonymous-Should be proud of your son, so do I! (At least the make-up years)