Some Thoughts about Summerfest

Another Summerfest has come on gone and I'm glad to have seen Rush and Yes this year. Many great names showed up and sent my head reeling on whom to see. Eric Clapton, Tom Petty, ZZ Top, Lynyrd Skynyrd, Santana, and Rush. That's just at the Marcus Amphitheater. Side stages included Counting Crows, Peter Frampton, Scorpions, Shooting Star, Blue Oyster Cult, Uriah Heep, and many countless others. Yeah, I'd love to go everyday, but it gets expensive...

Ticket prices were $15 per person after 4:oo PM. That's not bad if you're going see the Scorps or something for a day. Summerfest is an eleven day event! That's not including parking ($15), beer ($6.oo a bottle), concert T-shirts ($35), not too mention food, refreshments, rides, etc. Plus the average ticket price for the Marcus was $70.

All that aside, there are a few things I'd like to say:

It still bugs me that bands like Yes, the Scorpions and Counting Crows were shoved to the side stages while American Idol Live and Jason Beiber were playing at the Marcus! From what I was told, the Scorpions were jammed packed like sardines in a can with fans at their stage while the American Idol tickets were trying to sell their tickets as buy one ticket and get one free! While I was watching Yes at the M&I Stage (which was behind the the Marcus) I did not see any fans on the Marcus balconies. BTW, who is Jason Bieber and why does everyone wants to kick his ass?

The cheesy fries from Major Goolsby's are excellent.

It took me over an hour to get out the parking lot both nights there. One night there was a drunk passed out on the ground next to somebody's car. Wondered if he was alive...till he his raised his hand and flipped everybody off. Then I heard the ambulance-probably came for him.

Downtown Milwaukee's traffic was notoriously bad on the way out. Definitely needed more police to direct traffic. I don't know many times I got nearly sideswiped by drunken idiots this year! Next year I'm taking the damn bus!

Did I say the Rush concert was unf@*ckingbelievable? Yes, it was! During the ending of the "Overture" theme flames shot out from the sides of the stage about 50 feet high! I could feel the heat from them! 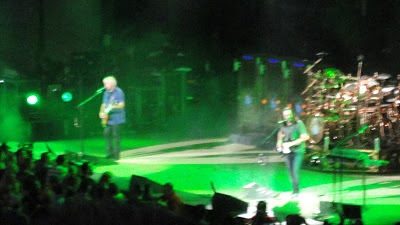 My son wasn't overly impressed with Yes, yet he took a lot of nice pics of them! I had bought a $200 Sony DSC-W350 camera specially for Summerfest. I wasn't about to bring my good camera in there and create problems with it! 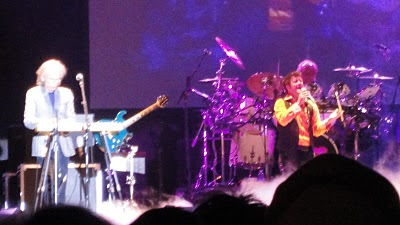 The weather was wonderful-no rain! Yet it was hot and humid inside the Marcus. Took my shirt off.

I could be wrong, but there seemed like a lot more people this year than the last! I tried to find out the official attendence, so far I got nothing...But I'm sure as hell I saw a lot of Rush T-shirts!

All in all, I had a great time! Many memories! Wish I could share them all! Each concert a different vibe...A different story....
Posted by drewzepmeister at 10:45 PM

Drew, just a heads up-- if you're interested I've started a message board for the discussion of music. I've included a section for posting links to music blogs and what not so you're welcome to plug your blog on there in addition to discussing whatever music your heart desires.

Thanks for the heads up Perplexo! I will check out the site!

Well like always you surprise me with your writting Dear. I love this one just like I love everything that you write. Because I know it all comes from the heart.

Totally agree with the selection of main stage acts. I was the one trying to see Scorpions and it gets so damn crowded with drunk people it just gets a bit too weird. We left cause we could not get to the bathroom nor get back near the stage.

I agree with the bus tactic. I will never park at the site again.

Well Dan, my friend from Watertown attended the Scorpions show and he said it was packed shoulder to shoulder! The fact that it was so crowded and it was the Scorp's final tour made me think it should of been held at the Marcus.

Anyways, they drive their car to Delafield and take a bus from the Park and Ride there. That could be an option for you next year. My issue is that I live so damn close to Summerfest. Take a street up to Hwy 32 and 20 minutes I'm there!

Yea but then it takes so long to get out of the parking lot. Because of all the drunks and almost get the car side swiped. They need more police at the corners closer to summerfest. But all in all I really had a very good time at summerfest.