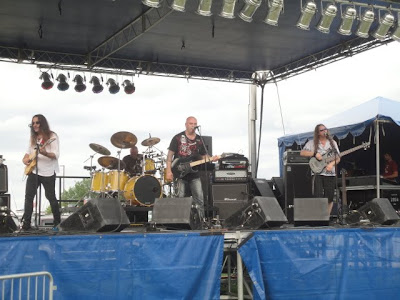 I knew I would never hear the end it if I told my good friend, Dan Buckley that I missed his show at Italian Fest today. So I went. I was running late this afternoon, so when I got there, I could hear them playing "Paradise City" from Guns n' Roses. Getting stoked about the kind of music that they were playing, I quickly got drinks an sat down on a picnic table.

Dan Buckley and I were good friends from my childhood years. Grew up in the same neighborhood, went the same schools and hung around the same bunch of friends. We shared a mutual interest in music. I remember him playing in various local bands. Somehow we drifted apart. It was only recently we got ahead of each other through Facebook. (Gotta love that site) I quickly learned that was playing bass in a Chicago area band called Supernaut. And they were coming to Racine! So I had to see them and catch up with Dan.

So how good were they? One thing is for sure, they didn't sound cheesy like many other cover bands I've heard. I was quite impressed with these guys! Drummer Micheal Bragg pounded the skins-sweat dripping off his brows- though out Metallica's "Enter Sandman" Dan Buckley, the monster man bassist, thundered his way through Van Halen's "Panama". Chicago raised axeman Dave Uhrich fired away his Joe Satriani like guitar solos all afternoon! I was blown away by his instrumental version of Queen's "Bohemian Rhapsody" That was definably interesting... The charismatic vocalist/guitarist Dan Lenegar growling voice soared to an impressive version of STP's "Vaseline".

The band plowed though numbers from yesterday and today. Revealing "Come Together", "Another Brick in the Wall (part2)", Finger Eleven's "Paralyze" and well as some original pieces.

I did meet with the band after the show. It was great catching up with Dan. Me thinks these guys are gonna go places...
Posted by drewzepmeister at 11:27 PM