I just got back from seeing Yes at Summerfest. Yeah, it's kinda late, but you how it is after a concert.... The typical traffic jams that plague the shows afterwards. This one was no exception. Well maybe, there was this drunk passed out in the parking lot....that's another story.

Anyways, my son, myself and a friend of mine went to Summerfest this afternoon to meet up with some other close friends of mine there. They had plans to go see the Scorpions at another stage. So we chatted for awhile. While waiting for Yes to make their appearance, I ran into some blogger friends of mine Dan and Joe Heuer there. We chatted for awhile before we ran off in different directions. 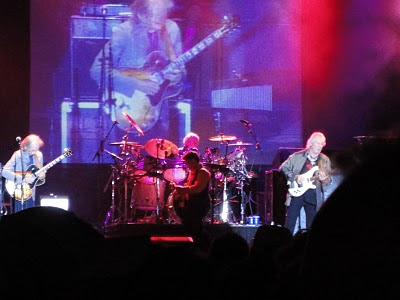 Yes pulled off an excellent show! They played mostly their classic tunes from their early years. Coming onstage during the show's opener "Firebird Suite", they rocked into the night starting with "Tempus Fugit" from the Drama album. From there, the band forged into more familiar material from earlier days like "Yours is No Disgrace", "And You and I", "Roundabout" and "Starship Trooper" Guitarist Steve Howe had his moment of glory with his acoustical solo "The Clap" The newcomers singer Benoit David and keyboardist Oliver Wakeman shown that they are worthy of being part of the band. Even though Benoit is no Jon Anderson, but he sure sounds a hell like him. Oliver sounded like he learned a few tricks from his father!

Here's a setlist from the show:

Posted by drewzepmeister at 2:37 AM

Awesome, Drew! I saw Yes live when I was about 17 years old and it was an amazing show! Great review! Sounds like Summerfest rocked! :)) I wish I could have been there.
Starship Trooper is one of my favorites :)
I'm taking off myself to my friend's beach house for a few days...sun and fun for me this week!
Have a Happy 4th, Drew :)
Hugs :)

Glad that you had a great time seeing Yes, Kelly! They are an incredible band! Have fun over the Forth!

The concert was awesome and I had alot of fun. The pictures turned out great. Your review on the concert is great.

The nice thing about having Benoit David in the band now is that they actually perform stuff from Drama. Because he wasn't in the band at the time, Anderson refused to ever perform anything from that album live. Benoit has no such hang-ups. Drama is my fave Yes album. I'd have loved to have heard Tempus Fugit live... the other fave from that album is Machine Messiah.

Now I've got the Drama album stuck in my head...

Perplexo-I was unaware of any David/Anderson feud till this point. I assumed Anderson was out for basically health reasons. Prior to this concert I was aware that they would playing Tempus Fugit and maybe Machine Messiah. What I was stoked about was that were doing "Close to the Edge" a couple of nights before and thought just maybe they'll do it this show, but didn't. Oh well, I'm happy what they played...

I don't believe the feud is so much with David as it is between Anderson and his former bandmates for continuing without him. He wanted them to put the tour on hold until he was well enough to join them. They didn't want to wait so they found Benoit David.

Trevor Horn handled the vocals on the Drama album but from what I've heard he doesn't have the range that Anderson or David have. I've heard snippets of a bootleg from Horn's one and only tour with Yes and I would concur with his lack of range.