Just got back from another AWESOME night at Summerfest! This time I saw Rush! No words could describe the show I saw! In a word, maybe...Unf*@ckingbelievable! Rush pulled off an almost three and a half hour show. No opening act whatsoever!

After a rather humorous film clip about Rush coming into being (staring the band themselves), the band exploded into "The Spirit of Radio"! This sent a sea of air drummers into a frenzy! The video projections behind the stage displayed not only the band in action, but videos of the songs all well! No detail was left unchecked. The stage set up was an elaborate set up of a time machine like thingy that looked like a cappuccino maker with horns covering the amps. The band plowed though tunes from yesterday and today. Tunes like "Time Stand Still" , "Freewill", "Presto", "Marathon", "Subdivisions", "Working Them Angels" and even a brand new number called "BU2B" were offered the masses with great delight! Then the batteries died on my camera.... 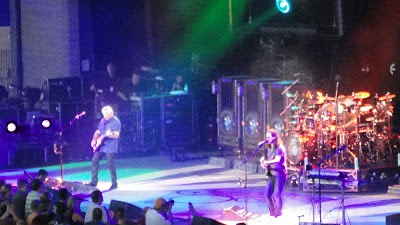 The second set started at dusk. The lighting was perfect! A major bummer for my camera with dead batteries... Nevertheless the show must go on! Another video later, the trio slammed the audience with "Tom Sawyer" and the ENTIRE Moving Pictures album! Yup, the full length of "The Camera Eye" included! I was really getting stoked here! Thinking the night just couldn't get any better, it did! I had my shirt off enjoying the summer sweat Having a beer. The Big Bang Fireworks celebrating Summerfest were going off over the lake behind us. Summer just couldn't get any better at this moment!

Rush played the new song "Caravan" before going into the customary drum solo by drummer god Neil Peart. Afterwards, guitarist Alex Lifeson did an acoustic guitar solo that flowed into "Closer to the Heart" To top the night off, the band did a rausous version of "2112"'s "Overture" and "Temples of Syrinx" and ended with "Far Cry" from Snakes and Arrows

For the encore, Rush played "La Villa Strangiato" and a reggae version of "Working Man" The show ended with a hilarious video of a couple of fans sneaking into their dressing room seeking autographs!

As I left the Summerfest grounds and was heading for the Main gates I saw glimpses of Counting Crows finishing of off their show... A Hell of great night!


Posted by drewzepmeister at 1:57 AM

That was a awesome concert. I had alot of fun at the concert. I love the pictures on your blog. They turned out great and what you wrote about the concert was great too!