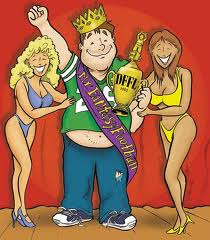 For the third year in a row now, I signed up for Fantasy Football at Yahoo.com. Joining my fellow Irregulars for another round of excitement and fun! My team, the Racine Irregulars, has a bunch a good players. Wide receivers Greg Jennings, Randy Moss and DeSean Jackson, running backs Joseph Addai and Shonn Greene, tight end Tony Gonzalez, kicker Sebastian Janikowski and the San Fransisco defense are on my roster. I'm hoping to replace Jay Cutler as my quarterback. All of these picks were auto-drafted.

This year I'm hoping to do better than the previous two. The first year I made the playoffs and came in forth or fifth place. Not bad for a newbie at the game. Last year I bottomed out due out of state trips and personal issues. By the end of the season, I had let it go. Not this year! Recharged and refreshed, I plan on kicking some butt.

This week, I go against my good friend from Tuscan, hale-bopp. His team, the Half-Astrophysicists, is looking good! Wish me luck!
Posted by drewzepmeister at 7:30 PM

I've been doing Fantasy Football for a few years now as well. I used to go for Tom Brady every year and it worked well for me for the most part. One season I came in first but in the first week of my playoffs I lost because Brady had an off weak, the Patriots won the game, but they did so with their running game, not their passing game. Tom Brady was a complete non-factor and even threw an interception or two so I ended up losing points on him that week. D'OH! This season, given the Bengals upgrades in the receiver department I went with Carson Palmer as my QB. I hope I made the right choice! I believe I too have Randy Moss as one of my receivers. I usually try to pick him too!

Being a Browns fan I was tempted to go with Jake Delhomme as my QB but he's unproven in Cleveland right now-- that's too big a gamble for my tastes.

I had Tom Brady the first year playing this game. He went down and was out after the first game of the season. Luckily, I picked up Tony Romo for the rest season.

This year I was hoping to get my hands on Aaron Rodgers, but with auto draft...no such luck.