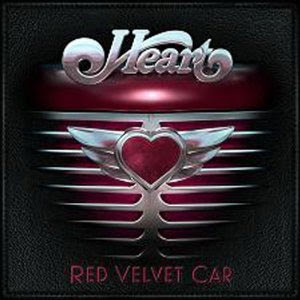 After seeing Heart twice in concert, one could guess that I'm a Heart fan. So it be no surprise that I RAN to the store to get this album when it was released! First album of new materiel since 2004's Jupiter's Darling, Red Velvet Car proves to be a worthy of wait! This album could possibly be their best since 1980's Bebe la Strange. That's saying a lot!

Returning back to the roots of the heyday of the 7o's, the Wilson Sisters and company will rock you breathless and memorize you with their folkish ballads. The album starts out with the intense acoustic "There You Go" before slamming into the all out rocker of "WTF" Title track "Red Velvet Car" reminds me of "Dog & Butterfly"-simply gorgeous. "Queen City" is an homage to their hometown of Seattle. Nancy Wilson offers her seductive voice to the country flavored "Hey You".

The album gets better at this point! "Wheels" proves that Heart can still rock like barracudas. My favorite track, "Safronia's Mark" begins with a mandolin laden lush that builds to climatic ending. Grunge like rocker "Death Valley" tells about the life on the road and the "bad trips" we take in life. In the beautiful "Sunflower" Nancy writes to her sister Ann with some touching lyrics. The closing number "Sand" is a retake of what they did in the Lovemongers. I believe I heard that song the last time I saw Heart last summer. It was a dedication to Micheal Jackson, who had died the day before.

Only a shell of the original band remain. Sisters Ann and Nancy are still taking the reigns while newcomers guitarist Ben Mink and bassist Ric Markmann fill in the vital places. Ben Smith rejoins on the drums. Long time member Howard Leese left in 1997 and now touring with Bad Company.

I highly recommend this album! ....Even if you are not a Heart fan.

Posted by drewzepmeister at 8:57 PM