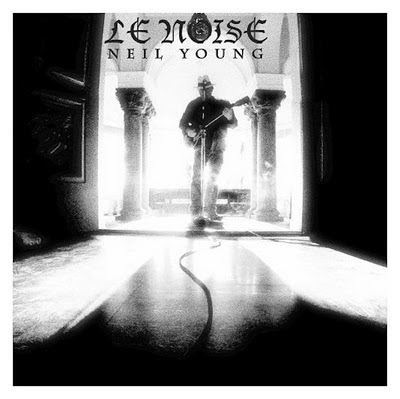 Life's like a box of chocolates when it comes to Neil Young, never know what you're going to get. Over the years, he has released a mixture of some incredible mind blowing albums and some down right crappy ones. On top of it, a wide spectrum of musical genres to choose from. So whatever is inside that piece of chocolate is going to be a bit of a surprise.

Knowing this, I have a tenacity to wait awhile before I go out and get a Neil Young record. Why pay a full price for a crappy album? Anyways, this album took me by surprise! I had seen a video on Seano's Circle of Fits and read a review on Isorski's Musings. I was so impressed from was reported that I HAD to get this album! I bought it last night.

Starting off the disc with a bang, the godfather of grunge delivers! The powerhouse riffs of the opening tune"Walk with Me" set me on fire! Here I was, turning up my speakers for the full effect. I could FEEL the grungy fuzz and the feedback. Wondering if the pictures were going fall off of my walls....

The second track, "Sign of Love" is a gorgeous rocker. Beautifully written seemingly about his wife, Peggy. It's about personal as one can get lyrically.

"It's an Angry World" shoots barbs venomously at the world around us. Young just rips and shreds his guitar, overflowing with it feedback and reverb.

My favorite track, The Hitchhiker, took me on a journey from Toronto to California then to Peru. Using drug overtones, Neil chronicles his life-showing his dark side along the path. I just love the melody of this one.

The entire album isn't just one big wall of overdriven amps. There are a couple of soothing moments here. "Love and War" and "Peaceful Valley Boulevard" are both gorgeous lyrically and melodically. They would fit perfectly an acoustic set along side songs like "Sugar Mountain" and "After the Gold Rush"

The most interesting aspect of this album is the absence of any back up band. This are no drums nor bass. No Crazy Horse or the Stray Gators. It's ALL Neil Young and his electric guitar. Don't need them. It may be a bizarre twist, but it works! BRILLIANTLY! Less is more. Without all the excess, its brings you closer to Neil.

In my honest opinion, this is the best work from Neil Young since the 1990 release of Ragged Glory. It ranks of there with Rust Never Sleeps, Harvest and After the Gold Rush as one of his finer moments.

Posted by drewzepmeister at 4:45 PM