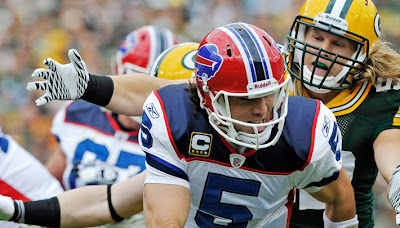 The Green Bay Packers won again against the Buffalo Bills 34-7 Makes their record 2-o for the season so far.

My thoughts on the game:
The Packers looked great going into the game overpowering the Bills to -2 yards
The Bills took over the game during second quarter, holding the Packers to nil.
For the rest of the game, it's was ALL Packers.
Packers defense sacked the Bills' QB four times and he was intercepted twice
The Bills have no passing game.

More on the game here.
Posted by drewzepmeister at 3:51 PM

I'm not sure which is stronger-- my love of the Bears or my strong dislike of the Cowboys... tough call!

Yes that was a good Packer game. But 2nd quarter I thought that they were going to get beat. They did prove me wrong after half time. They came back in full force. That really surprised me.

Now to the better game. The BEARS game. That game was even better because the Bears won there 2nd game and to who Dallas. That one I really liked. Yes this is a real Bears fan here.

I can't wait until next Monday night to see the Bears beat the Packers. I hope that the Packers don't get to cocky. They have there work cut out for them next week. I will take the Bears all the way.

Thank God we got Clay Matthews!

Perplexo-I'm not a huge fan of Dallas either. After losing to them a couple of times during the Farve era I grew a strong distaste for them. Then again, the Bears (and the Vikings) are the Packers' arch rivals. It'll be an interesting game next week!

Dan-I hear ya! Five sacks this season so far!