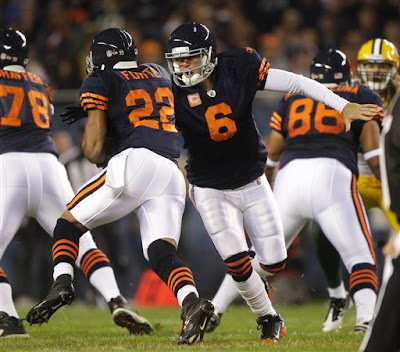 It's one of those games I'm gonna regret saying anything....In an action filled game, the Packers lost the Chicago Bears 20-17. Here are my thoughts of the game:

The Packers jump started the game looking awesome!
Aaron Rodgers looked brilliant at times reminding me of Brett Farve of his younger days.
At times it looked like either team could win.
The Packers had WAY too many penalties 17 of them! Mostly for stupid things that be avoided.
The game was tied at the end till a last minute field goal by the Bears.

Now that I've lost a bet, I have wear a Bears t-shirt tomorrow. I hope I don't break out in a rash....
Posted by drewzepmeister at 10:49 PM

The Bears didn't so much win the game as the Packers lost it. Of the 3 games the Bears have played this season the only game they've actually won decidedly was last week against the Cowboys. The first game (against Detroit) they won due to a bad call in their favor. And for last night's game they should send the Packers a Thank you card for winning the game for them with all of those penalties. I didn't catch the game, but from what I've read the most critical of those Packers penalties seem to have been committed by their defense. It sounds like their offense was firing on all cylinders. Heck I wouldn't have minded having Aaron Rodgers on my fantasy team this week (although Carson Palmer is getting it done for me on my fantasy team).

Now as for you to have to wear a Bears shirt. You will not get a rash from wearing a shirt. That's what you get for making a bet against the Bears. I am sure if it was the other way around who you made the bet with wouldn't have a problem wearing a Packer shirt.

Perplexo, Aaron Rodgers was on fire last night. He reminded me of Brett Farve with all the scrambling he did. The penalties are what killed the Pack. Stupid penalties like roughing the passer, unnecessary roughness, holding, etc.

If it's any consolation my Browns are now 0-3. The consolation to last Sunday's 20-17 loss to Baltimore was that Browns RB, Peyton Hillis seems to have come out of nowhere and he totally burned the Ravens D for 144 rushing yards. I'm just glad I noticed he was still available in my fantasy league before anyone else did. For this coming Sunday I have to decide if I want to start Carson Palmer (Bengals at Browns) or Derek Anderson (Cardinals vs. Chargers). Normally this would be a no brainer but Palmer has been struggling despite having a strong receiving corps. AND the Bengals are playing my beloved Browns... On the flip side Anderson who showed flashes of his former Pro-Bowl self in the first Cardinals game is going up against a struggling and vulnerable Chargers team... I'm leaning towards Anderson. I'm just hoping I get the good DA and not the Bizzaro DA this weekend. Maybe he'll surprise us all and have a 400+ yard game like Matt Schaub did for the Texans in week 2... chances are that won't happen, but a guy can dream.