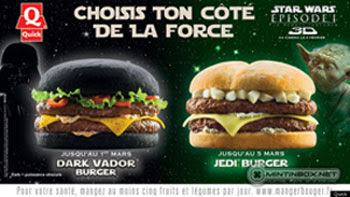 An interesting read from an article I read in the Huffington Post...

"A Belgian fast food chain Quick recently announced that its French outposts will serve the Star Wars–inspired burgers through early March. There are three themed varieties to choose from, each with its own unique connection to the movie.

Of the three promotional burgers, the one getting the most buzz is the one that's gone over to the dark side — literally. It's named the "Dark Vador Burger" (it's unclear why the reference to Darth Vader is spelled incorrectly — rights issues, perhaps?) and comes complete with a black bun. We're not talking any natural color derived from dark-hued grains — the bun is actually a deep black, presumably artificial color, which matches perfectly with the outer-space background in the Quick advertisement.

The other two burgers, the "Dark Burger" and the "Jedi Burger," seem relatively normal compared to the black bun of the "Dark Vador." The "Dark Burger," which is inspired by Darth Maul, looks as though it has a dark seasoning like poppy seeds or black sesame seeds on the bun, but otherwise appears pretty standard. The "Jedi Burger" (positioned next to Yoda in the advertisement), however, has a strange white topping that could be cheese."

I don't about people these days-anything for a buck I guess... Which one would you try?
Posted by drewzepmeister at 6:33 PM