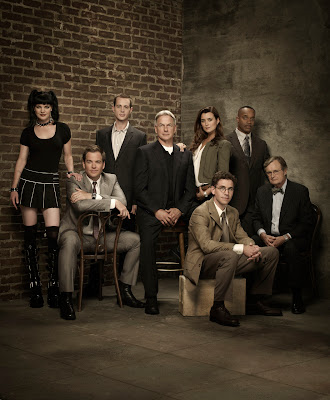 With winter here and being cold outside with nowhere to go, I tend to stay indoors and watch a little more tube than usual... Here are some of the shows I find myself watching.

NCIS- The abbrevion for Naval Criminal Investigative Service. A well written murder mystery show the revolves around an exceptional cast of characters. In its ninth season now, I love the individuality of each character ranging from the Gothic forensic scientist to the mysterious father figure team leader Special Agent Leroy Jethro Gibbs.

Mythbusters- This is a man's show. Explosives, firearms and controlled mayhem in the name of science. Adam Savage, Jamie Hyneman and their motley crew of "builders" take popular and Hollywood myths and test them with their own unique ways to see if a myth was plausible or not. I was cackling like a crazed lunatic watching pieces of a bulldozer fall from the sky after being blown up by 250 lbs of ANFO.

Law and Order Special Victims Unit- A well written crime mystery set on the streets of New York. Based on stories "ripped from the headlines", the show revolves around Detectives Elliot Stabler and Olivia Benson solving crimes sexual in nature. Whats more is the victim take a spotlight on the episodes.

Naruto Shippuden- The kid in me will watch animation forever. I've always loved the superhero and Star Wars cartoons, especially when the illustrations are well done. Japanese anime fascinates me as well, especially Naruto. Naruto was created by Misashi Kishimoto for Japan's weekly Shonen Jump magazine, later translated to English by Viz Media. Televised versions of the manga began to appear om Cartoon Network back in 2005. I began to get into it a couple of years later. The story basically is about a young ninja who through series of battles, tries to rid of hatred and tries to bring peace to the ninja community. I watch it weekly on Hulu.

That '70's Show- A comedy show that reminds me of my younger days. Set in the fictional Point Place, Wisconsin, this show takes the comic version of the '70's, hence the name. The jokes and references to various of my favorite bands are mentioned here and well as of my home state. Then there is the 'circle'... (Sounds familiar? It did to me..) Hell, my girlfriend thinks I'm a lot like Hyde.

I also to like to watch movies (I'm quite fond of "The Lord of the Rings" type movies) nature programs and dinosaur documentaries. What are you watching on TV?
Posted by drewzepmeister at 5:20 PM

Hey Drew: NCIS IS REALLY GREAT. I was addicted 2 them a few years back. I NEVER saw a bad episode. Was always hooked by the opening teaser. Haven't seen much lately, tho....
Lately Monday is my big TV nite -- TOP GEAR (new or reruns on BBC America) & ... *AHEM* ... WWE's Monday Night RAW. I can't help it. I love it. I love the Big Laughs & the Big Drama. I'm addicted. It's bad. I feel so guilty....
Oh, & CNN anytime, but mostly when I'm waking up & trying 2 get that 1st cuppa coffee down. & then when I get sick of the news I switch the damn thing off!

TAD- For us here it is on Tuesday nights at 7pm. Maybe different in other states.

Yes NCIS can be quite addicting...