Contradictory to the title, no, I didn't audition for American Idol nor doI ever plan to. A close friend of mine's daughter did. The auditions were held today at the Bradley Center in Milwaukee. This event drew large crowds from all over the region in high hopes and dreams to become the next Idol. 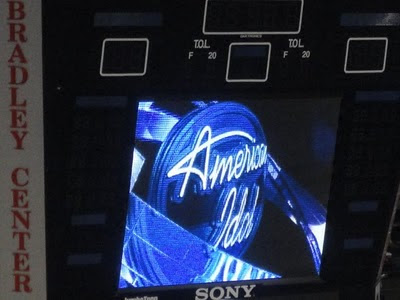 This is their story as it was told to me. On Monday and Tuesday of this week, the hopefuls would to go the Bradley Center with paperwork provided by the AI website. From there they'll get a ticket (free) and wristband.

The next day (today) , they arrived at the Bradley Center at 5:00 AM. Yeah, THAT early! People already out there waiting to get in! The throngs of TV cameras awaited the crowds as they arrived. Former Idol contestants Matt Girard and Danny Gokey greeted an audience of hopeful contestants to a couple of songs while they were in line. My friend described scene "A mob."

8:00 the doors opened to let people in. Nothing to do, but wait and wait and wait.....until your section was called.

This is just a preliminary round. So it's the producers that get to judge the ones being auditioned. So therefore, Randy Jackson, Sir Elton John nor Ellen DeGengeres were not there. The "winners" get to come back in September to try again. It's a long process of elimination...

So how did my friend's daughter do? Well, she sang "Big Girls Don't Cry" by Fergie. Sad to say, she didn't make it to the next round. I HAD my fingers crossed!
Posted by drewzepmeister at 7:34 PM

You did an awesome job on writting once again. That turned out great. Thank you for putting that on your blog Dear.

Gotta give her credit for trying!

Linda Lou! So great to see you again! She is planning to try again if it comes back to Milwaukee.