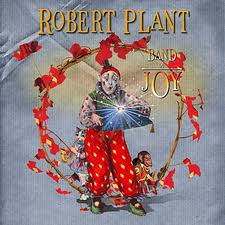 Since Led Zeppelin's demise in 1980, I've been following Robert Plant's career-watching the roads he has taken. Album after album, like Neil Young in a way, I'm finding it harder and harder to pigeon hole him in any single musical territory. He is always searching, evolving and broadening his horizons. I never what to expect from him.

Same goes this album! The golden god recreates the Band of Joy that enlightens the senses-taking you on a mystical journey though rockability, traditional American folk, and bluegrass-mixing it with old fashioned rock and roll. Many of the songs are traditional or cover tunes. Reworked and refined to a perfection. It may a far cry from the bombardment of Zeppelin's heavy guitars and wailing vocals, yet it retains the feel of the mystery that Zeppelin created. Remember , a good portion of Led Zeppelin's music was acoustic.

Gone are the "Immigrant Song" like vocal ranges. At the age of 62, this ought to be expected. Instead, the aging Percy carefully shows restraint using his pipes to create emotion and provoke thought. I found myself drawn to his voice like a mosquito to a light. I can close my eyes and feel his singing taking away to places that he is searching.

The first single off the album, "Angel Dance" sets into a groove that takes on a catchy melody. A Los Lobos cover tune that is highly contagious. A song that'll make the spirits rise.

Other highlights include "Silver Rider"-a song that starts off mellow and rises up a climatic ending. "You Can't Buy My Love" recalls "Gone, Gone, Gone" from the Raising Sand album. "Cindy (I'll Marry You Someday)" is an acoustical piece that is a reminder of "If I Were a Carpenter" from the Fate of Nations album. "Harm's Swift Way" is a catchy number.

If you're expecting an amps cranked to eleven type of album here, you're not find any such luck. Here Mr. Plant has matured to be a fine singer, a bit mellowed out over the years. He still hasn't lost his integrity, in fact I still think he sounds just as great now as he did in Zeppelin.

Posted by drewzepmeister at 10:42 PM

Robert Plant sounds a lot better since he left Led Zepplin. I really like this album. You are right about the way it sounds I agree with you.

The song Angel Dance it a real good song. The one thing I really like about it is it sounds like him not a Zepplin tune. That is with the whole album.

Anonymous@10:53 Plant, to me always sounded great! Unlike many singers out there, Plant seems to have aged with grace vocally.

Anonymous@2:30 Glad that you agree!